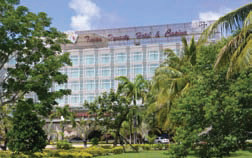 A ruling in the Commonwealth of the Northern Mariana Islands has granted the U.S. Department of the Treasury authority to regulate casinos in the territory. A statute has been authorized by Congress allowing Treasury to expand the definition of the United States to include the CNMI.

“Tinian Dynasty’s actions presented a real threat to the financial integrity of the region and the U.S. financial system,” said FinCEN Director Jennifer Shasky Calvery in a statement.

Hong Kong Entertainment moved to dismiss the case, due to the belief the U.S. Congress never gave the U.S. Treasury authority to regulate the CNMI casinos. Manglona ruled that from its inception in 1970, the U.S. Bank Secrecy Act granted the Treasury secretary authority to include “the possessions of the United States” as part of the “United States.”

George Que, a VIP services manager from Tinian, was charged in 2014 with conspiracy to allow gamblers to conduct transactions over $10,000 without filling necessary paperwork with the U.S. government.