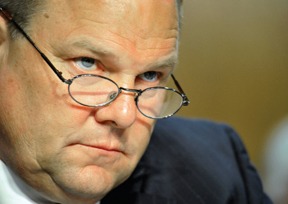 U.S. Senator Jon Tester of Montana, vice chairman of the Senate’s Committee on Indian Affairs, has re-introduced a bill advertised as a “clean fix” to the Supreme Court’s Carcieri v. Salazar ruling that held that tribes recognized by the federal government after 1934 cannot put land into trust.

The bill would amend the Indian Reorganization Act of 1934, which the Supreme Court held set the rules for putting land into trust.

Ever since the 2009 Carcieri ruling, tribes have been heavily pressuring Congress to “fix” the ruling so that the BIA can resume allowing tribes to put land into trust unhindered. Many tribes consider the ruling anti-Indian and a direct knife blade into the heart of tribal sovereignty.

According to Tester, “This bipartisan bill was built with tribal input and eliminates unnecessary hurdles for tribes to increase economic development opportunities. The court decision had a negative impact on tribes across the nation by causing costly litigation and harmful delays in critical infrastructure development. This solution addresses one of Indian Country’s top priorities and is a strong step forward to fulfilling the federal government’s treaty and trust responsibilities.”

As “clean” as Tester’s “fix” is, it is unlikely to pass without considerable tinkering from senators who see this as the golden opportunity to fix things about the process of putting land into trust that they don’t like.

Most powerful and insistent among them is California’s senior senator, Dianne Feinstein, who strongly opposes the current approach by the Department of the Interior for making it easier for tribes to put land into trust, and to build Indian casinos.

At the first hearing for Tester’s bill, Feinstein said, “Any Carcieri fix must address concerns about tribal gaming.”