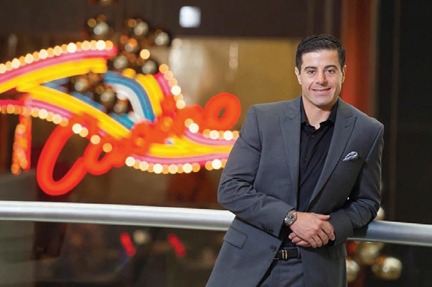 Aaron Gomes is an Ivy League graduate from the University of Pennsylvania with an MBA from Drexel University, but he is the first to say that his education began long before that from his father, the legendary Dennis Gomes, who passed away in 2012.

Many in the casino industry claim Dennis as a mentor, but only Aaron can claim him as a father. Gomes began his career in Las Vegas with MGM Mirage’s Management Associate Program (MAP). MAP is an accelerated job rotation plan designed to develop high-level executives. Soon after finishing the program, Gomes was promoted rapidly through principal casino operating departments from slot operations analyst to slot marketing analyst to casino marketing manager.

In 2007, Gomes joined the Gomes Gaming Management team as vice president of marketing and operations for the Indiana Live! casino in Indianapolis. During his tenure, he helped develop, open and manage the casino. He is currently the president, CEO, and owner of Gomes Gaming.

In 2010, he took his talents to Resorts Casino Hotel, the first hotel and casino in Atlantic City, as executive vice president of operations. Gomes worked on re-branding the property as “The New Resorts” and managed $8 million in capital expenditures. In February 2012, Gomes was named acting CEO within Resorts Casino Hotel, the youngest casino CEO in Atlantic City history. Soon after, Gomes resigned to pursue a new opportunity in Australia.

This opportunity was a managing director position for Echo Entertainment’s Jupiters Gold Coast Casino. While there, he redeveloped Jupiters under a $350 million plan, was responsible for 2,000 employees, and managed an average of $300 million in annual revenue.

But Gomes points to the influence that his father had on him.

“I grew up going to work with my dad all of the time, going to work functions, having dinners in the hotels, and getting to know a lot of people in the industry,” he says.

The skills that led him on the road to a senior management position were humility and a willingness to learn from those around him. On his first day at Jupiters, Gomes says he stated, “I am not going to be judged by how quick I come in and force my ways on you, but rather on how quickly I learn from all of you and supplement your best practices with those that I have gained from my past experiences.”

The best advice Gomes offers to up-and-coming professionals is to master the ways of both “old-school” and “new-school” casino executives. He defines “old-school” as those executives who have mastered relationship-building with customers and team members, know how to motivate, and truly understand the value of forming strong relationships with everyone around them.

On the other hand, he defines “new-school” as those executives who can analyze spreadsheets, predict customer behavior, send out direct mail to get the best ROI, and put together the fanciest presentations. Gomes advises young executives to learn and develop both ends of the spectrum.

Gomes looks forward to starting a new role back in the United States in the fall and continuing to learn from those around him.