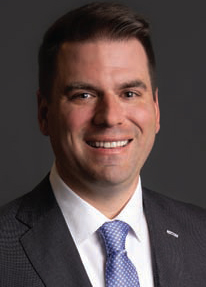 So is it any wonder he ended up in the food industry after college? But the road to Sysco Las Vegas, where he serves as president, began while still in college, when Radetich worked part-time at Wegmans Food Markets in his hometown of Buffalo, New York.

“Sysco was the first link and then the journey began,” he says. “I was fortunate to always have the support of my family growing up. I admired my father’s work ethic and success of starting out as an electrician and progressing his way to being vice president of sales. This was a compelling story which motivated me to achieve more.”

After college, Radetich relocated to Fairfax, Virginia with Wegmans. He later took a position with Sysco as a marketing associate in Phoenix. Hired at 22, he recognized an outstanding opportunity when he saw one.

“I needed to stay focused because I had so much to learn,” he says.

Radetich’ s career progressed through various sales positions. He moved to Illinois as a vice president of sales. A year later Radetich returned to Phoenix, where the company named him executive vice president in 2016, then later that year, president of Sysco Las Vegas, a company which works with almost every casino in Las Vegas.

“I attribute a lot of my success to the amazing people I surrounded myself with,” he says. “I had outstanding mentors who truly believed in me, for which I will be forever grateful. I have always focused on building a highly engaging and customer-centric leadership team.”

Chris Jasper, the vice president of sales, was one of those amazing people, who tapped Radetich to become district sales manager in Flagstaff, Arizona.

“Chris is an outstanding leader, humble, always focused on people and process, and is willing to make the right investments in customers and employee associates’ development. His leadership enabled me to have so much exposure to the business and our customers that I ultimately progressed multiple times under his leadership.”

The other mentor who made a large impact is his grandfather, John Mueller.

“I have never met someone more selfless to support those around him and ensure that they come first. From a young age through today, he provided real feedback and guidance that I take to heart and has always been there to coach me.”

Radetich was so caught up in moving his career forward he failed to appreciate some of the great experiences and opportunities in front of him.

“Since being in Las Vegas, I have truly dedicated 100 percent of everything I have to the present and future all within the great city I love,” says the car fanatic, who loves to drive through Red Rock Canyon or other various parts of the Southwest desert.

His advice for younger people that want to join the industry: stay focused on the customer and their experience.

“Build people around you that are people-focused,” he says. “Develop relationships and network with people that are willing to invest the time with feedback and guidance for you. It is not about racing to the highest position you can in the shortest period of time, it is about staying true to yourself and allowing yourself to develop in the role.”