In the rise of eSports, clear lessons for the commercial casino industry 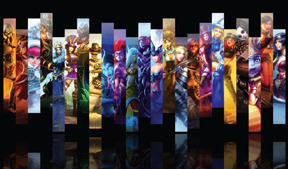 The rise of professional competitive video gaming—generally referred to as eSports—has caught many by surprise.

Perhaps such a phenomenon was inevitable; video games are both entertaining and generally invite competition by nature, so it naturally follows that many who enjoy playing video games also enjoy watching video games contested by players possessing elite levels of skill.

What should come as even less of a surprise, even to those caught off guard by the recent cultural ascension of eSports, is that eSports gambling is drafting on the growth of eSports. While still in a nascent stage, eSports gambling already boasts an aggregate handle that outstrips both daily fantasy sports and regulated sports betting in Nevada.

ESports gambling spans a wide array of products, enjoys some clear parallels with—but also some equally clear points of departure from—traditional gambling, and contains critical lessons for a commercial casino industry searching for ways to connect with the next generations of customers.

How do people engage in eSports gambling?

Before we get to those lessons, there are a few foundational pieces to get out of the way. The first: How does eSports gambling take place?

Cash betting is the simplest of the two, and functions more or less analogously to traditional sports betting. ESports fans wager cash at sports books with a dedicated eSports focus, like Unikrn, or at mainstream sports books offering eSports markets, like bet365 and Pinnacle.

Other popular cash-based eSports gambling products include fantasy eSports sites (offered by both DraftKings and FanDuel) and sites where players pay an entry fee and compete head-to-head in various video game titles for a prize (GamerSaloon).

Virtual-item betting is a bit trickier to digest. Various video games offer virtual items (often referred to as “skins” because they alter the cosmetic appearance of a player’s character in the game) that players can earn, purchase and trade among each other. That combination of value and transferability created the conditions for these virtual items or skins to be employed as an ad hoc currency.

Gambling sites where virtual items could be deposited and gambled, with additional virtual items serving as the potential prize, were quick to follow the introduction of transferrable virtual items in major video games like Counter-Strike: Global Offensive. Sites offering virtual-item gambling provide a full spectrum of products to players; sports betting, roulette, dice games, lotteries and coin flips are among the most popular formats.

How big is the market?

Cash betting on eSports currently generates a relatively modest handle. Estimates from Narus Advisors and Eilers & Krejcik Gaming call for a total amount wagered across all eSports cash gambling products of $649 million in 2016. The vast majority of that will be sports book-style betting on eSports matches. For the sports books leading the vertical, eSports handle sits in a second tier of sports in terms of volume (think greater than rugby but less than ice hockey).

Virtual-item betting is a different, and more complex, story. When we published projections for virtual-item handle back in May, we saw a market that would top over $6 billion in total wagers before the year ended. Then, in July, game publisher Valve, which controls the games with the majority of virtual items used for betting (CS:GO and Dota 2), launched a crackdown on virtual-item betting sites.

The immediate impact of that crackdown was a violent reshaping of the market for virtual-item betting. Many high-profile sites shuttered in the wake of Valve’s actions. But no small amount of sites blatantly defied Valve’s ban and continue to offer virtual-item betting to customers.

Where is the market heading?

We expect cash betting on eSports to enjoy largely uninterrupted growth on the way to reaching roughly $11.5 billion in handle by 2020. A prediction of some 20X growth over just four years certainly raises some eyebrows, but we believe the growth story is relatively clear and non-controversial:

• ESports betting will continue to draft off of the broader global growth of eSports and the video gaming industry.

• The growth of eSports betting will soon pass a tipping point of demand after which mainstream bookmakers will materially increase marketing budgets, product investment, and the development of trading expertise related to

•  ESports betting handle will benefit significantly from the development of more sophisticated betting products and markets (right now, simple match outcome betting accounts for the majority of action) along with broader event coverage and higher limits.

Tellingly, growth in eSports betting volume at vertical leader Pinnacle has doubled every year since inception, and is set to grow over 300 percent year-over-year in 2016.

Virtual-item betting is far trickier to handicap. The controlling question is simple: How successful will Valve be in its crackdown on betting sites? We do not believe Valve can completely eradicate virtual-item betting (the only way to do so would be to eliminate the ability for players to transfer items, a change we imagine the company would make only if legally compelled to), so success becomes a question of degree:

• If Valve enjoys a high degree of success, the virtual-item gambling market could shrink to a shadow of its former self (our bear case for 2020 is total wagered of $166 million).

• If enforcement lags a step behind motivated gambling site operators, activity could rebound and climb back toward $1 billion.

• But in nearly all plausible worlds, virtual-item wagering handle never returns anywhere near the dizzying heights of 2015-16.

What are the threats to growth?

While the upside for eSports gambling is significant, there are two potential choke points for growth.

The first is game integrity, an issue that manifests in both familiar and unfamiliar ways in competitive eSports.

Match-fixing—including scandals at the highest levels—is a documented part of the eSports landscape. Relatively low compensation for players, deep industry fragmentation and the lack of a universal governing body are just a few of the factors that all but ensure match-fixing will remain a material issue in the near term.

But eSports must also guard against unique threats to the game environment itself.

On the most malignant end of the spectrum: Players already have developed “hacks” that confer game-deciding advantages over competitors (such as the ability to automatically aim precisely in a combat game). Preventing such hacks in competitive play requires a significant investment in vigilant oversight, an investment that some event organizers may not be able or willing to commit.

In grayer territory, we find a more subtle sort of game exploitation that stems from the reality that digital environments are unpredictable and exploitable in a way that physical environments are not. LeBron James cannot suddenly jump three times higher one night than the night before. But resourceful eSports players can uncover developer oversights that, when exploited, immediately and violently upset the balance of the game.

One recent example makes the point. In July 2015, eSports powerhouse Blizzard was forced to ban a Heroes of the Storm game character from use in competitive play after an eSports pro leveraged a bug in the game—during a competitive match—to endow that character with game-dominating abilities.

Athletes probing the edges of a game for an advantage are endemic to all sports. But the inherent presence of such a significant blind spot (game developers lack a perfect understanding of what is possible in their worlds) injects a unique uncertainty into eSports betting.

A second threat to growth can be found in the cultural linkage of video games and minors. The persistent preconception that video games are largely for kids doesn’t stand up to scrutiny (the average age of an active eSports player hovers around 25, and the average age of a fan drifts closer to 30; both numbers are likely to head upward in the decade ahead). But the fact remains that millions of eSports players and fans are below the legal age to gamble (although the same could readily be said for traditional sports).

That reality, paired with the stereotype of video gaming as an activity dominated by adolescents, will likely create cultural, legal and regulatory stumbling blocks for eSports gambling products that did not exist for traditional gambling products. The threat of pushback alone may deter game publishers from even allowing arm’s-length associations with gambling, let alone embracing and integrating the activity.

The takeaways for the commercial casino industry

First: A strong demand for gambling exists among eSports fans. A persistent trope in the commercial gambling industry is that millennials don’t have the budget for or interest in gambling. Cash betting on eSports tests the validity of that assumption, and virtual-item gambling absolutely explodes it, at least in regards to the sub-section of the millennial generation that is engaged with eSports.

The development of skin betting into a multibillion-dollar industry by turnover took a little over a year, and happened in an almost completely organic fashion. There is simply no world in which such a rapid development occurs in such a fashion absent an intense level of inherent demand for gambling among eSports fans.

Second: That demand may not be obvious through the prism of traditional gambling. Every generation prefers to gamble in a slightly different way. The same is broadly true for every culture. The emergence of virtual-item gambling among eSports fans underlines this point.

The apparent absence of successful skin betting sites built around slot machine-style games furthers the point. The modern casino is dominated by the slot machine, so much so that a cohort not engaging with slot machines can quickly become a shorthand for that cohort being generally disinterested in gambling. For whatever reason, the slot machine format does not appear to resonate with eSports fans (even when presented in the most favorable context possible), a predisposition that seems to broadly echo throughout the millennial generation.

Third: Focus on speed, simplicity and social elements when designing gambling games for the eSports audience. The majority of popular virtual-item gambling games (outside of sports betting) are rapid-fire games that resolve in a matter of seconds, with new rounds starting right as the last round concludes (or occurring in parallel).

The fundamental game mechanic in popular virtual-item gambling products tends to be hyper-simple (a coin flip, a lottery draw, a game of roulette reduced to black/red/green). This simplicity extends to the user interface. Options are minimal. Bells and whistles are all but absent.

While frills are few and far between, social elements abound. The majority of popular virtual-item gambling products involve players pitted against one another in a pool. The most popular skin sports betting site is a tote system. Even in games where players compete against the house, there tends to be some social element involved.

ESports still seems more fad than phenomenon to many. That attitude is understandable, but is becoming increasingly less defensible, especially in the context of the modern casino industry.

Leaders in heavyweight mainstream categories such as broadcasting (ESPN, Turner), new media (Amazon, Facebook), beverage (Coca-Cola, Budweiser) and insurance (GEICO) have recognized eSports as a viable bridge to a new generation of customers. Armed with the roadmap provided by the current market for eSports wagering, there’s little reason for the commercial gambling industry not to follow suit.