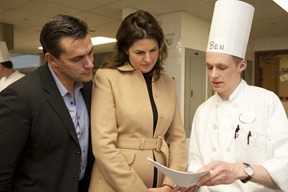 What happens in Las Vegas came to the Cornell University School of Hotel Administration in April for the 84th Annual Hotel Ezra Cornell.

Hotel Ezra Cornell is an annual, weekend-long educational conference hosted by the students of the Cornell School of Hotel Administration for leaders of the hospitality industry. Comprised of educational seminars, leisure activities and food-and-beverage events, the weekend strikes a thoughtful balance between education and entertainment.

The purpose of the weekend is for students to practice the skills they have learned in the classroom and to showcase their talents to industry professionals. In the past, Hotel Ezra Cornell, or HEC, has had themes such as “Sustainability Through Innovation” and “A New Era of Leadership.” This year, the HEC board of directors decided to focus on the Las Vegas industry with a tagline of “Illuminating the Possibilities: Learning from Las Vegas.”

“We chose the theme because Las Vegas encompasses a variety of different aspects of the hospitality industry,” says Program Director Alison Harrigan. Harrigan, a Cornell senior, is in charge of the educational and leisure programming for the weekend. “What’s great about Las Vegas is that it has everything—food and beverage, design, operations, ties to Wall Street—but bigger and better than anything anywhere else in the world. Everyone who works in this industry can truly learn something from the large scale of the Las Vegas community.”

Harrigan is one of 17 members of the 84th Annual Hotel Ezra Cornell board of directors, appointed annually to lead the organization. Every year, 400 students—over half of the Hotel School—are involved in Hotel Ezra Cornell. Students do everything from cooking and serving meals to marketing and public relations to turndown service and a “Personal Concierge” program. “It has been an amazing experience to lead such a talented group of individuals,” says Kira Gailey, managing director of HEC. “I truly believe that Hotel Ezra Cornell is a hotelier tradition that brings to life what we learn here at the Hotel School.”

The conference hosted over 250 guests despite the economic downturn, a testament to the draw of Las Vegas and the interest in learning more about gaming.

The weekend, which took place at the Statler Hotel on the Cornell campus in Ithaca, New York, started on Thursday evening with a nightclub-themed opening cocktail party featuring addresses by Gailey and Hotel School Dean Michael Johnson. Later that night, HEC guests gathered in the lounge for a speakeasy-inspired “afterglow,” where they were joined by  Las Vegas executives.

The two-day program included a “State of the Las Vegas Industry” address by Marc Falcone (class of ’95) of Goldman Sachs, who also ran through a brief history of the Las Vegas Strip. Loveman’s presentation followed, covering topics from managing in a down economy to questioning age-old industry practices.

Hotel industry icon Sharp gave a keynote speech addressing operating in the down economy. “The fundamentals of our industry are sound and will weather this economic storm, and we can all look forward to the continued growth and prosperity of this industry,” Sharp said. His discussion also featured commentary on how luxury has redefined Las Vegas, and vice versa. His Four Seasons Las Vegas is one of the many Las Vegas hotel properties now focused on the high-end traveler.

The day of program events was rounded off by an intriguing presentation by Boughner, who discussed the history and complexity of developing in Las Vegas. He showed photos of different Las Vegas developments and answered questions about the prospects of developing in the current economic conditions.

Stone gave a presentation Saturday morning addressing the global expansion of the gaming industry. Stone spoke on how Las Vegas was the birth of what has become a global gaming industry as well as how the economy will affect hotel casinos in Macau, Singapore and other emerging and potential gaming jurisdictions.

Later in the afternoon, events included the sixth annual Culinary Mystery Box (the HEC version of Iron Chef), where guests could compete with surprise ingredients to present a meal judged by Hotel School chef Bob White, Elizabeth Blau and Todd English. Guests could also choose to attend a “blind wine tasting lesson” by Greg Harrington (’92) of Gramercy Cellars fame. Lastly, Tom Breitling, senior vice president of business development for Wynn Resorts, spoke on the “Wynn Business Personality” and discussed “inside the boardroom” details on being one of Steve Wynn’s closest executives.

The weekend was topped off by a spectacular Saturday night gala banquet with an illuminating design featuring several courses influenced by molecular gastronomy. After the banquet, guests were able to mingle with students and other guests at the “Breakfast at Midnight”-themed cocktail event.

The Cornell Hotel School currently features an introductory-level class on casino operations, and has produced notable gaming-specific research through its Center for Hospitality Research.