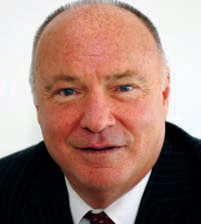 As the gaming industry welcomes 2013, eyes will continue to be fixed upon the state of Massachusetts, which will be the latest state to throw its hat into the ring that has become mainstream casinos across the U.S. This makes the man leading this effort, Massachusetts Gaming Commission Chairman Stephen Crosby, the most important individual in the state’s gaming business.

“Massachusetts policymakers have clearly decided that the benefits of economic development, good jobs and new state revenues are the baseline conditions that make expanded gaming desirable,” says Crosby. “The commission’s job is to try to leverage this investment even further, to maximize public good, while keeping the undesirable consequences to the barest minimum. Nothing can totally prepare you for gaming licensing and regulation, but the breadth of my background has made it possible for me to oversee the very big picture in gaming development.”

Crosby’s extensive and diverse background made him a natural to usher in gaming in Massachusetts. He has 45 years of experience in policy-making, entrepreneurship, nonprofits and academics. Prior to serving as chairman of the Massachusetts Gaming Commission, Crosby was founding dean of the John W. McCormack Graduate School of Policy and Global Studies at the University of Massachusetts.

“As a former private-sector CEO and senior policymaker in government, I have dealt with the issues that get raised in building a controversial new industry,” says Crosby. “We are asking our proposers to be truly innovative in bringing gaming to Massachusetts that is compatible with our rich culture and additive to our existing tourism, and other entertainment industries. Out-of-state gamblers provide the greatest economic impact for Massachusetts, and we are encouraging our proposers to make national and international appeal a high priority.”

The state of Massachusetts expects to award its first gaming license within a year, and all of the licenses in 12-16 months. The background check process is already under way, with at least 12 organizations competing for initial approval at the local level.

“It is a busy and exciting time,” says Crosby. “But as much as we appreciate the wish to get casinos up and running quickly, we are pledged to the public to make the absolute integrity and thoroughness of the process our highest priority.”

Crosby’s track record is proven. As secretary of administration and finance to Governors Paul Cellucci and Jane M. Swift from 2000 to 2002, Crosby was responsible for development, legislative approval and implementation of the governor’s $23 billion annual operating budget and a $2 billion to $3 billion capital budget. He supervised 22 agencies with 3,000 employees. In 2002, he served as chief of staff to Governor Swift.

Crosby is utilizing the same supervisory skills with the state’s distinctive enabling legislation that sets up a competitive bidding process for three of the four sites (the fourth is reserved for a Native American tribe). Local approval through a municipal referendum is necessary, along with heavy investment in the research and programmatic intervention in the socioeconomic impacts of expanding gaming.

“Our legislation is distinctive,” says Crosby. “We want to hear solutions to the issues concerning problem gambling and mitigate the impacts of expanded gaming on affected cities and towns for the betterment of the citizens of Massachusetts.”