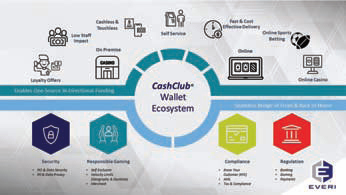 Everi Payments Inc., which has vowed to defend its patents against a lawsuit filed in September by Sightline Payments over cashless payment technology, has officially filed a countermeasure in the case. The countersuit seeks to have the Sightline patents declared invalid.

Everi has filed a petition for inter partes review (IPR) with the Patent Trial and Appeal Board (PTAB) of the United States Patent and Trademark Office. IPR is a proceeding before the PTAB where a petitioner challenges the validity of a U.S. patent by filing a petition with the PTAB against a patent owner. The timing of the IPR process is defined by statute.

“Our petition seeks invalidation of certain claims of U.S. Patent 8,708,809 (the ‘809 Patent’) owned by Sightline Partners, LLC,” said Everi in a statement. “In September 2021 Sightline filed a lawsuit against Everi asserting that Everi was infringing the 809 Patent.”

Sightline filed the lawsuit in the United States District Court for the Western District of Texas, despite the fact that both Everi and Sightline are headquartered in Las Vegas, and the alleged infringing product is not made, used, offered for sale, or sold in the state of Texas.

“Everi believes this action is without merit and Everi will be vigorously defending the same,” Everi’s statement said. “In addition to the present petition to invalidate the 809 Patent, Everi is reviewing potential petitions for IPRs to be filed against other Sightline patents asserted in the lawsuit.”