Why casino marketers will be missing the boat if they don't examine how this can impact their operation and attract new, younger customers 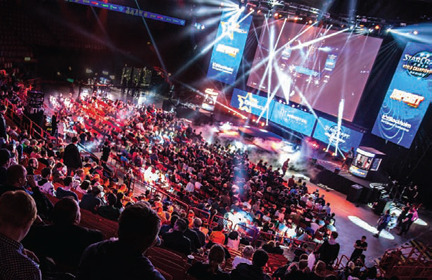 The headline read, “Why eSports Is The Next Big Thing In Marketing.” The source: Forbes Magazine. The article was by Baldwin Cunningham from February 2016.

Yes, it was in that Forbes.

Are you still not getting it? Apparently, it has taken a while to sink in. In the casino and gaming sector, it perhaps has yet to fully sink in. eSports is the next big thing—in fact, it is the major big thing in casinos for the foreseeable future.

Here are some facts:

• Millennials are now the casino’s most important customer. The millennial cohort group is now the largest demographic group in the United States, surpassing both baby boomers like me and the Gen X in between. How obvious can this be to the casino operators? The millennial is the primary customer segment now and for the next 20 years. There are more of them than any other customer segment a casino has, and as nature dictates, the number of other demographic group customers will continue to shrink. So much so that within a short period, the rate of decline will increase dramatically.

• Millennials are the most unique generational cohort group since the 1930s. I’ve used the following example a few times recently with my baby boomer colleagues. I ask them the ages of their children. In one example, he had a 20-year-old daughter. I asked him at what age the daughter first attended formal schooling. He replied about 4 years old. I asked what was in that classroom. He looked at me with an odd sort of expression, so I prompted him with the answer: a computer. What did your 4-year-old daughter do on that computer in the classroom, I asked. Answer: She played games. She played games structured around learning, but nonetheless, she played games.

Fast-forward 16 years and put that fact into perspective. His daughter has never lived in a world without a computer; she has never lived without the internet, and for all practical purposes, social media have always been a part of her personal communication ecosystem.

His daughter is a digital native. The technology is embedded in the fabric of her life. That fact does not apply to the behavior of the baby boomers or their parents (the silent generation). No other generation has ever been like them.

Secondly, consider their assured sense of self-confidence. I asked if his daughter played any sports as a child. Of course, he said; she played soccer from an early age. So, at the end of the season what happened? Answer: everyone got a trophy. Her generation has been coddled, supported and encouraged as no prior generation experienced.

They’ve also been referred to as the nanny generation. We have taught them that they are protected, smart, capable and can take on challenges. That they are all equal and that collaboration and cooperation with your cohorts is what matters. There were no “Baby on Board” stickers when I was a child. I remember riding in the front seat of my parents’ car without a seat belt. So, is it any surprise that the millennials are so incredibly different?

The implications are obvious. No enterprise—casino, retail store, restaurant or whatever—can use the same values and processes that worked on the baby boomer. And many are already facing that harsh reality on the bottom line.

• eSports is about much more than video games. If you think it’s only about the games, then you are wrong.

The games represent a form of media to the millennial, and as such fulfill certain uses and gratifications within each one. That validated theory is called Uses and Gratifications Theory (UGT).

UGT suggests that “media use is motivated by needs and goals that are defined by audience members themselves, and that active participation in the communication process may facilitate, limit or otherwise influence the gratifications and effects associated with exposure.” Among the assumptions of UGT is one very relevant point about eSports: “The audience is active, and its media use is goal-oriented.”

Millennials play eSports because the media form satisfies psychological needs within them—goals. Get it? There are underlying psychological needs that are satisfied by playing, watching and participating in the eSports media experience that are unique to the millennial. It is not just about a video game.

eSports and its media are disruptive to the current casino model. In my innovation class at the University of Nevada, Las Vegas, we discuss the concept of disruptive innovation in great detail. One of the elements of disruptive innovation postulated by famed Harvard innovator Clayton Christensen in his monumental book on innovation, The Innovator’s Dilemma: The Revolutionary Book That Will Change the Way You Do Business, was that the incumbent enterprise has little motivation to disrupt its business for several reasons.

Second, in actuality, there is little immediate financial incentive or return for investing in disruptive innovation for the enterprise. What is the current profit from the millennial in the casino of today? It is negligible. So, why would a casino focus resources away from their most profitable customer (baby boomer and silent generation) toward a far less profitable one, the millennial? That would be very difficult to rationalize and contrary to most business logic.

However, as Christensen explains, the failure to do so will eventually lead to disruption of the industry. I believe we have a hint to that in the daily fantasy sports situation of the last year. Putting aside the many controversial issues about DFS, one fact is indisputable: The DFS enterprises were able to motivate millions of millennials to play their game.

Virtually none of that happened in a casino. Whether it will ultimately return or in what form is not the point. The point is that it was disruptive innovation. It focused on a customer perceived to be unprofitable by the casino. There is a lesson in that example that can be applied to eSports.

Look Outside the Box

One of the most important lessons in disruptive innovation is that attempting to pursue this with internal teams usually leads to failure.

In a Harvard Business Review article, Christensen and Michael Overdorf stated, “The reason that innovation often seems to be so difficult for established companies is that they employ highly capable people and then set them to work within organizational structures whose processes and values weren’t designed for the task at hand.”

They assert that attempting to innovate with eSports within the existing organizational structure of the casino company is a high-risk bet. Imagine the operating executives at ExxonMobil with a strategic initiative to build a Tesla.

Disruptive innovation in eSports will succeed if it is built on the values, processes and resources of experts in the field, and most importantly, with and by millennials.

So, what exactly is an eSports experience in a casino?

Fundamentally, that is probably one of the first questions to answer. With all due credit to the first iterations by experts like Sam McMullen V, Levi Larkin and Joseph Bennecke at locations like the Downtown Grand in Las Vegas and with Gameworks, the question remains largely unanswered. But these millennials are among the brilliant minds considering it.

In today’s casino model, does it make sense to change the highly profitable slot floor and table games to eSports? From a financial perspective for the next quarter, the next year, the answer is probably no. From an experience perspective, what would you actually put there? An Xbox One in a kiosk? An alienware gaming computer in a fast-food setting? A giant LED screen to watch Twitch streams like a sports book?

But alas, danger also lurks in these murky waters of innovation. The flood of eSports discussions has inundated the industry. Suddenly, the market has begun to become filled with so-called experts on the millennials and eSports.

Today at the International Gaming Institute, we are beginning to explore ideas around curricula and research specifically tailored toward eSports in the integrated resort. While we may not find all of the answers, one thing is for certain: We will be exploring the right questions. And with the assistance, guidance and expertise of the millennial experts, we may in fact help guide the discussion.

As an industry, the casino industry is hardly at timeline zero. But in terms of eSports, it is just getting started. A couple of quotes sum it up:

“For eSports to thrive, three key aspects must be addressed—social experience, authenticity and inclusion. I believe developing an ultimate social experience for all, from competitive gamers to spectators, to enjoy together is vital for success. Millennials are looking for authenticity in their experiences, and when they find that, they become one of the most loyal communities. Gamers are the most inclusive in their culture, and giving them the ability to get together and share their passion is such an awarding experience for all to reap the benefits.”
—Professional gamer, eSports expert and millennial Joseph Bennecke

“Millennials and gamers are all about the experience. Experience is defined by our presence, and augmented by our perception. If our perception is focused on the past or the future, then we aren’t in the present, and we usually escape into our phones to create our own experience. Casinos of the future will need to cultivate a powerful presence in the experiences they provide, so that engagement isn’t lost by a similar shift in perception.”
—Futurist, technologist, eSports expert and millennial Sam McMullen V

The answer to eSports for the casino begins and ends…. with a millennial, the next big thing.