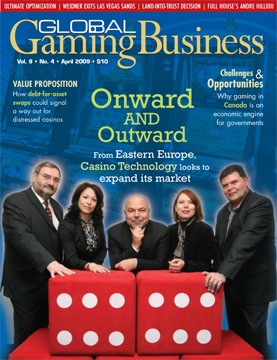 You may not encounter a sea of machines on a casino floor formed by hundreds of games produced by Bulgarian slot manufacturer Casino Technology. (Yet.) However, it is a good bet that you will remember the ones you do find.

That’s a fact being proven by more and more players of late-not to mention slot managers-as the Sofia-based manufacturer, founded in 1999, spreads its wings across the European continent.

“This year we are reaching a major milestone in our company history-our 10th year anniversary,” says Milo Borissov, founder and president of Casino Technology. “The company is now well established, at a stage where we’ve proven ourselves in major markets, we have enough resources, and in 2009, we can focus on making the processes in the company more efficient. That’s not to say we’re inefficient at the moment, but you can always improve.”

One of those efficiencies, says Borissov, is to augment the company’s current group of game designers and software engineers-a central focus of the recent workforce expansion-with third-party developers.

“We’ve put a lot of effort into employing the right people, in creating the right team to create the right product,” Borissov says. “We also realize we can achieve better efficiency having simultaneous projects in place using third-party professionals.

“We believe this will help us deliver faster, enrich the library of games and make the products of Casino Technology more versatile.”

The company’s library of games, in fact, has been steadily growing-along with some significant hardware improvements.

New titles are consistently added to the company’s popular Gemini series of video slots. Games like “Golden Bird,” “Kilimanjaro Treasure” and “Aztec Gold” have achieved great success in Bulgaria and elsewhere in Eastern Europe, where Casino Technology commands a market share of more than 40 percent.

The company’s “MegaJack” progressive video slot won an award as the most successful video slot in the Balkans at last fall’s Eastern European Gaming Summit-along with a most-innovative product award for “PlayMe,” the multi-station automated roulette game in which player stations are built into a real grand piano.

According to Borissov, the key to the appeal of Casino Technology games can be traced to program math first, but also to how the features are presented. “Math, of course, is most important,” he says, “but that goes hand-in-hand with the media, the graphics and sound, which provide the first impression to the player. Easy-to-understand concepts also are very important. At the end of the day, the games should be straightforward, simple and player-friendly.”

The success of these games has been enhanced by several improvements in how they are presented. Last year, the company enhanced its “Gemini Sensa” upright cabinet, a slim-footprint cabinet designed with player comfort in mind. New features include a third video monitor for video streams or other marketing functions, a simplified button panel, and touch-screen controls-called “Crystal Touch Sensor Buttons”-for which a patent is pending.

“We are very much excited about the new Gemini Sensa product,” Borissov says. “We changed the player interface with big reel symbols, we simplified the screen layouts, and we added many other features to maximize player comfort. The general look, the feel-everything is designed for maximum player satisfaction. We did player surveys in which 99 percent said they were quite happy with the improvements.”

More innovations were launched in January at the International Gaming Expo in London, where the company unveiled “Tangra Touch,” its new slant-top video slot platform.

“The advanced solutions in the new cabinet offer a range of new possibilities to clients,” says Borissov, “mainly adding to operator serviceability and player comfort. The design impressed IGE visitors, who gave the slot machine a high appraisal.”

The new brand names are drawn from Bulgarian culture-“Tangra” is a god of Bulgarian legend, signifying strength and power; “Tough Rider” is a storied horseman who, legend has it, joined with Tangra to create the state of Bulgaria more than 13 centuries ago.

Bulgaria, though, is only the starting point for Casino Technology. The company is currently involved in a multi-pronged expansion effort, with the strongest push this year concentrating on central Europe and Latin America, according to Rossi McKee, vice president of the company.

This year, the company is focused on getting its games into casinos in Hungary, the Czech Republic and elsewhere in central Europe, while at the same time testing the waters in South America, the U.S. Native American markets and Asia, where the company has installations in Cambodia and Macau in the southeast and in Kyrgyzstan in central Asia.

“We believe we can have a better position in Asia in the future, of course, including installations in the Philippines, Taiwan and other emerging markets there,” McKee says.

In South America, Casino Technology already is established in Lima, Peru, where the company is represented by TransAtlantic Gaming-a partnership that has led to new sales in Peru, Colombia, Venezuela, Uruguay, Panama and the Caribbean. The Gemini video slots are proving to be successful and popular in Lima.

“We have more games approved according to the new Peruvian regulations, and this year, we expect to expand those installations,” says McKee. “We are going to be looking for business in Argentina and Chile in South America, but our main goal right now is to establish and expand our presence in Peru.”

Although McKee predicts that Casino Technology will be a bit more selective this year in deciding among the growing number of trade shows and exhibitions, the company has been using these venues to introduce its products to a growing customer base. In addition to the Global Gaming Expo in Las Vegas and the IGE in London, the company has had a significant presence at the SAGSE show in Argentina, G2E Asia in Macau and other regional shows.

Perhaps the most important new regional trade event for Casino Technology began last September in the company’s home city of Sofia, Bulgaria, with the inaugural Eastern European Gaming Summit and Balkan Entertainment & Gaming Expo. The event, organized by the Bulgarian Trade Association of the Manufacturers and Operators in the Gaming Industry, drew more than 2,000 visitors from 40 countries to a showcase of products from suppliers based in Bulgaria, Slovenia, Czech Republic, Serbia, Russia and other Eastern European gaming jurisdictions.

Casino Technology sponsored the show, which McKee says was the realization of a longstanding goal of the Bulgarian trade association.

“The association was formed in 1992 and Mr. Borissov was one of its founders,” she says. “For almost 15 years, the association supported the gaming industry in many different ways, but from the very beginning there was an idea that Bulgaria should host a trade exhibition and gaming conference, and as a member we’ve been very supportive of this idea.”

McKee says the right moment came after Bulgaria became a member of the European Union in 2007. “The show has given Bulgaria a much better presence in the industry, not only locally, but in the international gaming community,” she says. “For us, the first year was a success. We made a lot of good contacts, and the conference was well-organized. It was a pleasure to see so many international speakers there.

“It was a very good start for the conference in Sofia, because Bulgarian gaming operators need more international gaming culture. We believe next year will be even better.”

Casino Technology’s strategy for expansion works well within the current international economic slump, mainly because the company can move into new markets at minimal incremental cost, enjoying significant incremental revenue as a result.

Borissov predicts that operators in many markets will cut back in purchases due to the economy, but he says in certain markets the economy actually works to the supplier’s advantage. “The problem has been that the European economy is based on the euro, and international markets including Asia and Latin America are based on the U.S. dollar,” he says. “The market is very volatile, and it’s difficult to predict where the euro will be versus the U.S. dollar.”

Right now, the fact that the dollar is stronger versus the euro is helping the company’s business in markets like Latin America and Asia. “For us, it was not easy to export before, because the euro made our product very expensive in international markets,” Borissov explains. “I believe that now, we have a certain advantage, because our product is less expensive for these customers than before. Customers are paying 20 percent less for our product in Latin America and Asia. This is a very important advantage.”

International expansion also will be helped along through close work with international testing labs, he says. The company has a well-established relationship with Gaming Laboratories International, certifying all of its games initially through the GLI Europe lab. More recently, the company established a relationship with GLI’s main lab in Las Vegas, where Casino Technology games will now be certified for Native American markets beginning with California.

“At G2E, we had a number of meetings with California operators, and all of them had a good impression of our products,” Borissov says. “All of them are good possibilities to install our products, and we expect to have some products in place there by the second quarter.”

The company is well-positioned for future growth as well, with a Silver membership in the Gaming Standards Association and, as of last year, ISO 9001 accreditation, an internationally recognized quality standard.

“Everything else,” says Borissov, “depends on game content. Our library is improving every day, and we are very much focused on game design. Technology is moving very fast, so our main objective is to make sure we implement the latest technologies in our products. Our game design team is focused on a variety of different game design concepts.

“If the game concept is good, and the technology is good, its success on the casino floor is guaranteed.”