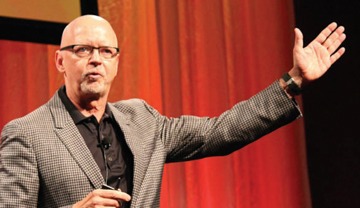 For each of the past 11 years, gaming supply giant Bally Technologies has hosted an event for its customers—casino operations executives from around the country—that offers a sneak peek at the latest from the company’s industry-leading systems division.

For the first 10 years, the event, held at various locations across the country, was dubbed simply the “Bally Systems User Conference.” But this year’s event was titled “Empower”—to reflect not only the expanded offerings of Bally since its acquisition last year of table-game giant SHFL entertainment, but the evolution of the two-day conference itself from the systems division to slots, table games, marketing and other areas in which the company partners with casinos.

The core of the conference, though—held this year in June at Connecticut’s Mohegan Sun—has remained an educational forum on Bally systems technology and how it can be used to benefit the operator. “Bally is totally committed to the systems business,” said CEO Richard Haddrill at the start of the conference. “We have a terrific team of executives, and there is no lack of emphasis on our systems business.”

Practical demonstrations, not only from Bally executives but from prominent operators, typically show how technology offerings are being used and can be used in the future—from the Elite Bonusing Suite (EBS) of networked modules for the slot floor to the latest online, social and mobile technology.

“The Dragonplay acquisition will allow us to take our content to yet another medium, and learn more about how these people play, to help be an even better partner to you,” Haddrill told the operators in the audience.

Haddrill also used the conference to announce the formation of Bally Ventures, a new business unit focusing on bringing technologies new to the gaming industry to customers, and working with customers on adapting those technologies for maximum profit.

Haddrill quoted Henry Ford in explaining Bally Ventures to the audience. “As Henry Ford once said, ‘If all I did was give people what they wanted, I would have given them faster horses.’ What we’re trying to do with Bally Ventures is bring ideas to the industry which at first might feel a little uncomfortable—like the automobile did to people who rode horses—but at the same time work closely with you to commercialize those and make a difference in our industry.”

Haddrill said the new business unit will focus on innovative technologies and forming strategic partnerships to bring them to the market quickly. It’s an expansion of the function currently performed by Bally’s Innovation Lab, the unit headed by Senior VP of Technology Bryan Kelly that is charged with scouring the high-tech world for gaming-friendly ideas.

“We’ve always had people at Bally involved in getting new products to market,” Haddrill said during a press session at the conference. “But if you look at where Bally is as a thought leader, we’d like to be even faster and more commercially driven—in other words, prioritizing the products better based on the value they give to the casino.”

The Empower systems user conference drew a total of 464 attendees, including 378 current customers from across the industry, compared to 451 attending last year’s conference, which included 328 current customers—a 15 percent increase in customer participation.

The conference featured not only workshop sessions and educational presentations by Bally executives in all areas, but by Bally customers including Pinnacle Entertainment CEO Anthony Sanfilippo, Caesars Entertainment IT Vice President Melissa Johnson, Pechanga Slot Operations VP Buddy Frank, Wind Creek IT Vice President John Enriquez and others, who provided demonstrations on how Bally’s EBS and other technologies are being used in the field.

Meanwhile, attendees could sample all the technological offerings at the “Innovation Lounge,” a mock casino set up to demonstrate how the new products work in the field.

Among the highlights this year were “Take ‘N Play,” a system that allows casinos to offer mobile devices—tablets at first—to players who would like to take their play session away from the slot floor to other approved gaming areas.

Slated to be commercially available by fall’s Global Gaming Expo, Take ‘N Play allows the player to hold a tablet to the screen of a slot to have the current live game transferred to the mobile device, along with the credits. The screen of the machine goes gray to indicate that it is being played remotely.

The player can then take the tablet anywhere within a resort that is approved for gaming, and continue the same game. Bally officials say they developed the system the same way they develop much of their new technology—in response to a customer request. In this case, it was from an operator looking for ways to mitigate the negative effects of a smoking ban. Revenues had dropped as gamblers interrupted their play sessions for smoke breaks. Take ‘N Play gives them the chance to go to an approved smoking area and continue the same play session.

Tom Doyle, vice president of product management for Bally’s systems division, said company officials envision the Take ‘N Play product being used in the future as a way to capture new slot play from younger customers, by enabling casinos to set up ultra-lounges, poolside bars and other areas in which customers can play slots on mobile devices.

The product also could provide new play areas at casinos that already are at the maximum number of slots permitted by law. Casinos are able to use geofencing to define the areas in which the tablets would be operational for remote gaming.

Power Progressives is a flexible networking tool that allows casinos to tailor and schedule mystery progressives according to groups in the casino, time of day, or any of a multitude of other criteria. Operators can choose a symbol in the pay table of any slot to use as the Power Progressive symbol for that day, adjust the amount of jackpot, or otherwise tailor the prize for promotional purposes.

Doyle noted that the program also enables jackpots paid on slot machines, using jackpot symbols of each individual game, to be tax-deductible as promotional expenses through the mystery jackpot system.

Infinilink is one of the table game-based innovations that was presented at the conference by Roger Snow, the longtime SHFL entertainment innovator who was featured in his first Bally user conference as senior vice president of table products.

According to Snow, Infinilink, still in development, will match up math to table-game odds for the purpose of working progressive jackpots into the house-edge setup of each particular game. “For example, it’s 20 times more difficult to get a royal flush in five cards than in seven cards,” he explained. “Infinilink will make it 20 times more difficult to win the (mystery) progressive.” He said the company is targeting release of Infinilink for the end of the year.

Another table innovation presented by Snow is Shuffle Flex, a technology that will calculate lease charges on shufflers based on the number of shuffles. “The operator won’t have to waste money on shufflers sitting on idle tables,” Snow said.

Snow also presented “Safe Bacc,” which integrates the shuffler in a baccarat game with the card shoe. It scans the game to prevent scams that occur when cards are physically transferred from the shuffler to the shoe.

Several service-based system improvements also were highlighted at the conference. Enriquez from Wind Creek showed how his casino is using the Bally BOSS beverage-ordering system to improve drink service—the casino has instituted a system in which customers are granted free play if their drink order is late beyond a set threshold.

Improvements to the Bally Service Tracking Manager system also were highlighted. One improvement replaces the smart-phone communication system with a wrist-mounted device.

“Eighty percent of these improvements come from customers,” Haddrill said. “We put together products that will solve a problem for our casinos.” That’s where the systems user conferences come in, he added. “We’ve had very good attendance, very positive meetings, very good customer endorsements, and great examples of how they are using our products.

“That’s one of the big evolutions over the past five years—the return-on-investment examples are better and better.”

Conference attendees also were treated to a keynote dinner featuring an intimate performance by comedian Jay Leno. But the real stars of this show were on display back in the Innovation Lounge.