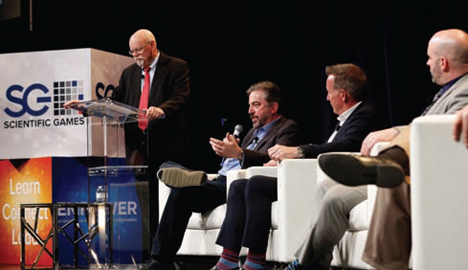 The Empower Conference is a three-day event designed to bring Scientific Games executives, R&D staff and game designers together with their customers from markets around the world. The conference gives customers an advance look at technology and products that are sometimes a year or more from commercialization.

Empower 2017 drew more than 700 attendees from more than 200 casinos. Golf and wine-tasting events on the first day were followed by two days of panel discussions, more than 30 how-to workshops, and more than 40 individual breakout sessions. Attendees learned about current and future products from each of the company’s business divisions, and how products and themes are now converging across all of those three businesses.

“We are here to provide the tools, solutions and services to deliver high-performing games designed to increase your revenue, your engagement with your guests, and of course, your operational efficiencies,” Scientific Games CEO Kevin Sheehan told attendees. “That’s why we’re here today. We’re here to listen to your needs, interact, and to come up with collaborative solutions so we can all be successful as we move into the future.”

It was the first Empower conference for Sheehan, who was named CEO last August after seven years as CEO of Norwegian Cruise Line. He told the Empower attendees that one key to success both for the supplier and its customers is continuous partnerships that will result in taking the industry forward.

“The cornerstone of all of that is innovation, and the art of the possible,” he said. “And that’s the key to all of our shared success.”

Before the start of the two-day conference portion of the program, there was a quotation on the large video screen in the Planet Hollywood Showroom:

It was referring to the news with which Scientific Games was opening this edition of Empower—the announcement of what the company is calling its biggest-ever licensing deal for themed slot machines. Sheehan announced the company’s new license to use the James Bond film franchise for themed games spanning land-based gaming, lottery games, and interactive/social games.

The exclusive agreement with EON Productions Limited, Danjaq, LLC and MGM Interactive Inc., a subsidiary of Metro-Goldwyn-Mayer Inc., gives Scientific Games the rights to leverage all past and future James Bond films, as well as all the franchise’s talent portraying the suave British spy created in 1953 by novelist Ian Fleming.

Scientific Games will capitalize on the James Bond experience across its omni-channel portfolio. “The Bond franchise is clearly a long sought-after and incredibly exciting brand for our industry,” Sheehan said. “James Bond is synonymous with action, excitement and next-generation technology. We look forward to harnessing the power of the Bond brand to drive innovation across the company in the years ahead.”

Sheehan commented that Bond is a perfect theme for gaming, the lead character having frequently been portrayed in casinos. Bond was a frequent patron of high-end gaming rooms, beginning with Sean Connery at the chemin de fer tables in the first of 24 Bond films, Dr. No.

The company will use images and movie video clips of all seven actors who have portrayed Bond on film throughout the years—Connery, David Niven, George Lazenby, Roger Moore, Timothy Dalton, Pierce Brosnan and Daniel Craig.

The Bond announcement was the first of many highlights of Empower 2017. This year’s conference included product introductions in the TwinStar cabinet range, technological advances in the iVIEW4 system of picture-in-picture communications and bonusing display, future technology peeks into cashless play, and a report on the development of new types of games designed to appeal to the millennials and other younger casino players.

One session concentrated on how to monetize skill games and casual games favored by the millennial generation; another highlighted game hardware designed to take casinos into the future with a new generation of players.

The panelists covered the evolution of game styles in the form of the TwinStar cabinet platform, the first to accept both Bally and WMS-branded content. Oher subjects included the iVIEW4 display system, which now features web-based content management—allowing casino operators to instantly change communications with customers in an HTML format—as well as a brighter display, a faster boot time and more power.

The panel also discussed how the technology gap the casino industry once dealt with is closing. “We went from being 10 years behind (other industries) in technology to right on the front edge,” Wadds said. Gelber added that the 4K displays now being deployed in Scientific Games’ slot products are not even in the consumer market yet.

Kelly, who runs Scientific Games’ forward-looking iLab—which seeks to apply new technologies in the general business world to gaming—ran a separate break-out session on the iLab’s newest technologies that was, typically, one of the highest-attended sessions of the conference.

The panel discussed the emergence of Big Data, the task of managing data, serving the millennials with new types of gaming spaces, and the emergence of new technologies such as virtual reality, which Lightbody tested at BCLC casinos.

Technology forums and how-to workshops covered everything from lottery systems to the nuts and bolts of game design both on the slot side and the table game side.

One highlight of Empower was a keynote address and roundtable panel led by Frances Fragos Townsend, homeland security expert, TV personality and aide to former President George W. Bush. Townsend described how methods she used in surveillance and prevention efforts battling terrorism after 9/11 can be applied to innovation in businesses like Scientific Games.

One discussion went back to the James Bond franchise, and ideas from the distinguished panelists on how Scientific Games can maximize the value of the license.

Sheehan said the Empower conference is meant to further the mission of Scientific Games by working with the supplier’s customers to provide products that fill their needs and move industry innovation forward.

“Our mission here at Scientific Games is to empower our customers by creating the world’s best gaming and lottery experiences,” Sheehan said. “It’s really important to us. It gets me up in the morning.

“Our sense is that today is the day; we don’t have tomorrow. We need to be thoughtful of doing the next great thing at every moment in time.”