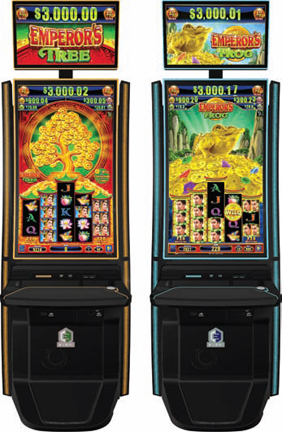 The games are “ways to win” scatter-pay setups, with no paylines and wins registered through adjacent symbols. In this reel setup, that results in 720 possible ways to win on each spin. Randomly during primary-game play, double symbols will appear on the grid—they count as two symbols in one symbol’s space. The top-paying two symbols can appear as double symbols, leading to wins of up to nine of a kind.

The base game also features random expanding wild symbols, wilds that can expand to fill up the all the spaces in the reel.

There are two bonus features. The free-spin bonus offers the player a choice of four different volatilities, through various reel configurations. The lower free-spin totals match the highest number of ways to win on each spin.

There are five progressive jackpots, with resets ranging from $20 to the top $3,000. Three or more game logo symbols trigger a progressive picking bonus, in which the player is presented with a field of gold coins, and picks coins until matching three to win the corresponding jackpot. In a unique twist, if the player reveals one of the game logo symbols—the frog or the tree—the lowest progressive symbol is eliminated from the field of coins, leaving the player a guaranteed win of one of the higher jackpots.