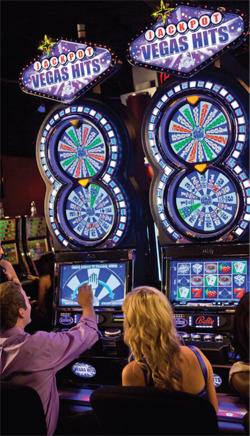 In the slot sector of the casino industry, the term means it’s time to renew the slot floor—that the slot machines on a given floor have lived their useful life, and will be cleared away to make room for the latest and greatest new games.

The recession has posed challenges to businesses of all stripes, and slot manufacturers are no exception. Slot-makers are at the business end of a vicious cycle: People have less money, so they gamble less on the slots. Gaming revenues for the casinos dip, leading to fewer profits, leading to lower capital budgets. Much of the capital there is goes to the physical plant—upkeep, room renovations. The slots on the floor? They’re working, they’re still earning, so why replace them? At least, why now?

For a few years, the slot-makers have been asking those operators, “If not now, when?” Getting an answer to that questions has been a lot like chasing the horizon: Predictions come out that the replacement cycle is about six months away, and in six months… it’s six months away again.

Meanwhile, the slot games on the floor, as a group, may be older than ever during the modern era. One would think that something has to give.

According to professionals in both operations and on the supply side, the wholesale renewal of slot floors is still elusive. Few expect huge replacement sales to happen this year. Few disagree that the prospects should be a bit better next year, but even that is uncertain.

Predictions on when the next big slot replacement cycle will begin are “only as accurate as the predictions of those who say when the economy is going to turn around,” says Steve Zanella, general manager of MGM Grand in Detroit. “You can guess, forecast and hope, but as you come to the end of the year and look at the capital available for the next year, you’re probably going to push it back again.

Zanella, a 20-year MGM executive who served as vice president of slots at Beau Rivage in Mississippi and as VP of slots and senior VP of marketing at MGM Grand in Las Vegas before being named to head up the Detroit property last fall, has witnessed what the recessionary capital crunch has done to the market for slot machines.

“If you look at the two major gaming companies, us and Caesars, there has not been a whole lot of capital available to do game refreshes,” Zanella says. “When you look at the industry on the operational side, we’ve been running at losses—we’re not going to be investing a lot of capital until this economy comes around. Looking at it from a corporate perspective, we’ve got to take care of a lot more than slot machines. We’ve got to repair aging buildings, do room remodels and renovations—these buildings are capital-intensive.”

Zanella estimates MGM casinos are buying perhaps half as many machines, on average, as when capital was flowing freely before the recession.

He adds that the capital crunch has been made that much more difficult by the fact that advancing technology has bumped up the average prices of slot machines. Features like 40-inch LCD screens, LCD buttons and high-powered operating systems have raised costs, he says, and the fact that these features make the games earn more when in front of the player increases the capital conundrum—the operators want to offer the latest and greatest features to players.

Consultant Kathleen McLaughlin-Harris was VP of slot development for the former Harrah’s Entertainment during the industry’s flush years, and was managing director of global slot marketing and operations for Las Vegas Sands Corporation when the economy began to turn sour. Now owner of McLaughlin Gaming Group, McLaughlin-Harris says the continued research and development by the slot manufacturers throughout the recession, while bumping up the average price of a for-sale slot, was a proper and essential response by the suppliers—one that has kept the slot sector moving forward.

“What the manufacturers are doing brilliantly is using much more of a data-driven development strategy,” she says. “They’re not developing less; they’re developing smarter and more strategically. They didn’t have the same kinds of partnerships with operators five years ago, or 10 years ago.”

In addition to “developing smarter” by adjusting development schedules and picking and choosing carefully where to place R&D dollars, manufacturers have adjusted to the absence of capital by giving operators new business models for renewing floors. “Manufacturers, both domestically and internationally, have become very flexible and creative,” says McLaughlin-Harris, “involving financing models, terms and conditions of agreements.”

That slot manufacturers have managed to continue R&D efforts, creating new experiences for players, has been nothing less than remarkable given the economic environment of the past few years.

Providing the games operators want on their floors, though, was only one part of the puzzle. Manufacturers had to give slot managers with severe capital restraints a way to put that technology on the floors.

“When the economy started to get a bit challenging, we started to look at unique ways to get the product to operators,” says Candace Lucas, executive director of marketing operations for WMS Gaming, “either by leasing through participation models or through financing arrangements with the goal that they could still service their players with the most entertaining product out there.

“We have been able to work with several of our customers on creative ways to get product on the floors while working within their budgets.”

“I don’t think there’s such a thing as a standard contract anymore,” agrees Nick Khin, president of Aristocrat Americas. “We are being more flexible than we’ve ever been in sales models, some designed on payment terms, extended financing. We’ve had to be more flexible than in the past.”

Flexible financing for game purchases, though, has not been nearly as vital to furthering R&D as the participation model—the revenue-sharing business model that has spawned what Zanella calls a “love/hate relationship” with operators. “We love to hate it,” he says. “Some of the best games from the manufacturers are on the participation model, and we’d like them to give us a chance to purchase them. But they’re public companies like us; it’s a way for them to keep up their recurring revenue.”

Lucas says participation is the only feasible business model for high-profile licensed-brand WMS slots like Monopoly, Star Trek and Lord Of The Rings. Recovering the cost of those license fees on a for-sale model, she says, “would cost the operator more than they would want to spend.”

“One of our core strengths is the recurring-revenue game,” says Gavin Isaacs, chief operating officer of Bally Technologies. “These games come out and do extremely well. Vegas Hits is just off the charts. (Participation) gives the customer the opportunity to put premium product on the floor.”

Khin says Aristocrat has been focused on increasing its recurring-revenue lineup, which he says has been under-represented. “There is obvious opportunity for us in that space, but to capture a greater installed base, we need to have a solid pipeline of that premium product. We’ve been working very hard the past two years on that pipeline.”

Isaacs says the revenue-sharing model is essential to technological advance in the slot sector. “That’s how we fund ourselves and get our research and development money,” he says. “R&D is the business we’re in. If you stop investing in R&D, people stop buying your games. The bottom line is that we’ve got to keep innovating, and there’s a price to pay for that.”

Isaacs says Bally actually launches more games annually these days than before the recession. Lucas says WMS does as well, although the release schedule has been adjusted to ensure a good balance between games in the hopper for regulatory approval and those being launched for approval.

“We actually introduced more products this year than last year, which was more than the year before,” Lucas says. “We have continued to offer the complete bandwidth of product.”

Increases in product releases have come with a continuous stream of technological advances, and Aristocrat’s Khin says that’s where “developing smart” comes in. “We have put a lot of focus on technology in the past couple of years, but we’ve been very deliberate about it,” he says. “We’re not developing technology for technology’s sake; it really has to make a difference in the player experience.”

Some manufacturers have been putting forth server-based technology as a way to reduce capital outlays by requiring fewer machine purchases. Zanella, whose parent company MGM is running the world’s largest server-based experiment at Aria on the Las Vegas Strip, says the cost-saving aspect of server-based is not something operators will see immediately.

“It’s like the chicken and the egg, because you’ve got to spend a lot of money to implement it,” he says. “It takes a lot of investment to make server-based work. Where we’ve always seen the benefit of server-based is in marketing applications and customer service. We’re working on the marketing aspect. At the end of the day, you’ve got to have ROI.”

What does the crystal ball say when it comes to that elusive replacement cycle? Most operators and manufacturers agree with Zanella, who says predictions can only follow the economic recovery as a whole.

All agree that 2011 could be another difficult year, not only because capital budgets are still tight, but because there are not going to be nearly as many new openings as last year to fill the void for sales.

“We’re concerned about the number of new casinos  opening up this year—less than 10 of any kind of significant size across North America,” says Khin. “That’s the lowest number in quite some time, and it’s going to put a lot of pressure on the manufacturers.” He adds that there will be a small pickup in the replacement cycle, but not enough to offset the fewer number of casino openings.

Isaacs agrees that the fewer number of North American openings will offset slightly better replacement sales, but says he and others at Bally are hoping to mitigate the damage by more international expansion. “We’ll help weather the storm by looking for different opportunities, and continuing to grow markets around the world,” he says.

There is optimism that a thaw in the replacement freeze could actually be near, though—perhaps for 2012. “As the economy starts to get healthier and players increase their average bets,” says Aristocrat’s Khin, “operators will feel more comfortable about spending capital. We’re confident we will see an increase. We don’t expect it in 2011, but we do expect some recovery in 2012.”

“We’ve heard that things are getting better, and operators are actually getting their hands on capital,” says Lucas at WMS. “We’re encouraged by that, and we’re encouraged by operators’ enthusiasm, in that they are excited about some of our products. We believe things are going to be fairly flat in 2011 as far as operator spend, but we are excited and encouraged that 2012—our fiscal year starts this summer—will be much better.”

Of course, predictions about 2012 could end up like the “better-times-are-on-the-horizon” predictions of the past. In the end, there is only one true prediction of when the elusive slot replacement cycle will finally get here:

After people start spending money at the casinos again.