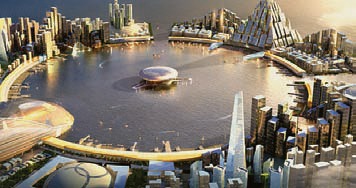 Officials in South Korea have drawn up ambitious plans for a massive tourist mecca on the islands of Yongyu-Muui near the port of Incheon.

Plans for “8 City,” as it’s known, located near Incheon International Airport and pegged at a cost of US$264 billion, include about 80 square kilometers of development comprising luxury hotels and casinos, condominiums, theme parks, shopping centers, a concert hall and a Formula One race course.

It will also include a “megastrip,” which at 200 meters high, 880 meters wide and 3.3 kilometers long is billed as the largest single architectural edifice in the world.

“It will become the world’s top city that has the creativity of Dubai and the convention centers and casinos of Las Vegas and Macau, as well as the shopping centers and financial hubs of Hong Kong and Singapore,” said Park Seong-Hyun, vice chairman of 8 City, the developer of the project.

Completion is targeted for 2030.