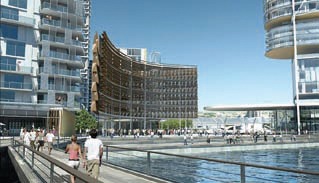 Echo Entertainment Group is open to James Packer’s plan to establish a joint venture servicing the international high-roller market in Australia should the billionaire’s Crown Limited increase its stake in its rival to 25 percent.

The Australian Financial Review revealed “that the VIP joint venture plan has been discussed informally between senior figures at the two companies, with Echo indicating that it is open to cooperation in a market where both companies face increasing competition from Asian rivals.”

The tie-up would only be discussed in detail after Crown increases its stake in Echo from 10 percent, as it has sought regulatory approval to do, according to a source cited by AFR. No formal discussions have taken place and no proposal has been presented to Echo, although both sides have expressed interest in the prospect, the newspaper said.

A joint venture in the Australian VIP market, which caters largely to well-heeled gamblers from across Asia, would align Crown and Echo’s interests in the only space in which they currently compete. A deal would also pave the way for cooperation on a new $1 billion-plus luxury hotel and casino at Sydney’s Barangaroo waterfront district, where Crown has commenced talks with developers despite Echo holding the monopoly casino license in Sydney.

Given that Echo’s casinos in Sydney and Queensland do not compete with Crown’s in Melbourne and Perth, it is understood that a joint venture in the VIP market could also remove Echo’s objections to Packer appointing a nominee to its board.

And that joint venture might be a casino in the Barangaroo precinct of Sydney. Last month, Packer announced a joint venture with Lend Lease Corp. (LLC.AU) to build a new luxury hotel resort in Sydney that would give Australia’s largest city its second casino. Packer said the deal is contingent on permission from lawmakers to put a casino solely for big-spending VIPs in the hotel by granting it a new casino license. He said a gaming facility would be necessary to provide the commercial underpinning for any new development.

“The only way to build another casino is with Echo before 2019 or after the government gives you a license,” said Ben Brownette, an analyst at Commonwealth Bank of Australia.

Packer says the deal with Lend Lease has a two-year window.

“A Crown integrated resort at Barangaroo would boost the economy, create thousands of new jobs, contribute significant tax revenues to the state government and enhance the overall attractiveness of Sydney as a first-class international tourist destination,” said Packer.

The willingness of Echo’s new chairman, John O’Neill, to engage with both Crown and Genting Group is an about-face after the public spat between his ousted predecessor John Story and Packer. Story declared he would “never” allow a competitor such as Crown onto the board, a stance that saw his rival run a ferocious media campaign against the chairman that ultimately succeeded in unseating Story in June. Packer, however, was unsuccessful in his attempt to appoint a director.

O’Neill has also reached out to competing investor Genting, which emerged as the surprise owner of a holding of just under 10 percent in Echo in early June, and like Crown has applied to the New South Wales and Queensland governments to increase its stake beyond that level.

Advisers and representatives of the Malaysian conglomerate have met with O’Neill and Echo CEO Larry Mullin on two separate visits to Sydney over the past two months, according to news reports.