Even without visitors from outside the region, Eastern European casinos can draw from a substantial customer base. In this special report, learn how and why integrated resorts in Eastern Europe can work for governments and investors alike. 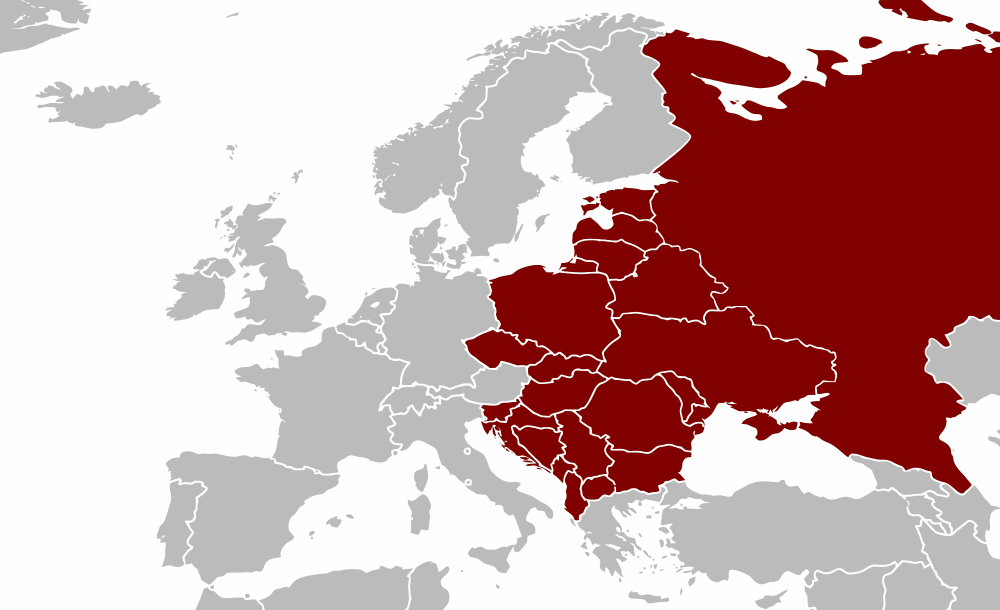 The development teams of the world’s leading gaming developers and operators are always searching for new brick-and-mortar opportunities. For years, the North American and Asia-Pacific markets could be counted on to provide strong returns on investments for new large-scale developments.

However, with a mature gaming market in North America experiencing single-digit revenue growth and the continuing lack of stability in many Asian-Pacific gaming markets, there is no doubt that developers and operators alike are finding fewer opportunities in these markets and searching for new geographical areas of growth.

In this article, the Innovation Group will examine the Eastern European region as a whole, as well as specific countries within the region, to determine if these markets can provide another growth channel for the brick-and-mortar segment of the industry. We will look at key characteristics of the region, consider legislative changes as well as the potential for new development in the region, and discuss how the region can benefit from the changing global landscape.

Gaming as Driver of International Tourism

Encouraging Western-style gaming developments can be an attractive proposition for those jurisdictions with underdeveloped or no gaming. The introduction of large-scale gaming resorts, or integrated resorts, has been a driver of international arrivals for a number of countries over the past decade.

Consider, for example, Singapore and the Philippines. Before the introduction of large-scale gaming developments in these countries, which came in the form of Marina Bay Sands in Singapore and Resorts World Manila in the Philippines, tourism growth could be labeled as uninspiring.

In 2005, Singapore welcomed 8.9 million arrivals. This figure grew at a compound annual growth rate (CAGR) of 2 percent through 2009, when arrivals reached 9.7 million. When Marina Bay Sands opened in 2010, however, tourism arrivals jumped by more than 20 percent to over 11.6 million. Strong tourism growth continued in the years following the opening of Marina Bay Sands—from 2010 to 2012, arrivals increased at a CAGR of 11.6 percent. Tourism in the Philippines experienced similar increases from the opening of Resorts World Manila in the second half of 2009. From 2005 to 2009, tourism arrivals grew at a CAGR of only 3.1 percent. In 2010, the first full year of operations for Resorts World Manila, arrivals jumped by nearly 17 percent. From 2010 to 2012, the strong growth in tourism arrivals continued in the Philippines, increasing at a CAGR of 7.3 percent. 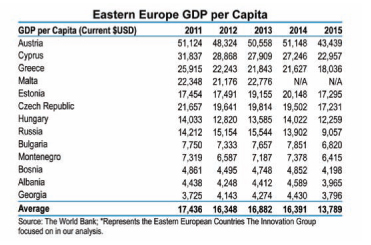 In addition to above-average GDP per capita levels, Eastern Europe has achieved above-average tourism growth in recent years as well.

We recognize that while there are positive economic and demographic trends occurring in the region as a whole, there are several countries, in particular, that are experiencing intriguing developments from a brick-and-mortar gaming perspective. Here, we’ll examine the specific countries that, in our opinion, have some of the most interesting gaming-related developments occurring. 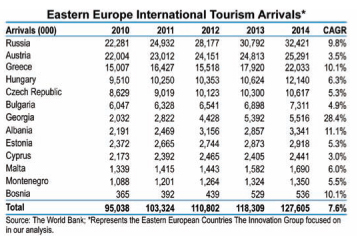 The brick-and-mortar casino industry in Austria is small relative to other global gaming markets, but growing. According to Casinos Austria AG’s 2015 annual report, revenues for the company’s 12 domestic casinos increased 20.3 percent from 2014 to €310.7 million. Additionally, visitation increased 8.6 percent year-over-year to 2.7 million total guests at the company’s domestic casinos. Approximately 1.4 million of these guests were international visitors. This strong growth has continued in 2016, with gaming revenue increasing approximately 8 percent in the first half of 2016 to €155.8 million.

In addition to Casinos Austria’s gaming operations, the country is home to numerous VLT outlets. As for now, Casinos Austria has a monopoly on land-based casinos in the country. This monopoly was secured in a recent ruling by the Austrian Supreme Administrative Court in which it revoked three additional licenses that were awarded in 2014. Recognizing the strong growth in GGR paired with annual international arrivals of over 25 million visitors, operators and developers should keep a close watch on the potential for any legislative changes that could allow for new land-based development in the country.

Albania represents a gaming market undergoing some unique changes. Currently, Albania allows gaming of almost all types, including traditional casinos with slot machines and live table games, electronic casinos (smaller, “slot hall” style casinos), online gaming, bingo, sports betting, and dog/horse track betting. However, under proposed gaming legislation, all existing casinos and electronic gaming facilities will close when a single license is granted to an operator for the casino to be located in the new Amadeus Palace resort in Tirana.

There have been numerous media reports on the developments surrounding the granting of a single license for an integrated resort on the island nation located in the Mediterranean Sea. The original list of bidders for the license include some of the gaming industry’s biggest names—Bloomberry Resorts, a consortium of Hard Rock International and Melco International Development, and NagaCorp.

In late September, both Bloomberry and NagaCorp stated that they would no longer be participating in the RFP process. There have been some additional hiccups throughout the bid process, including a delay for the casino license finalists to submit their final proposals. Despite the setbacks, the government still hopes to grant the single casino license by the end of 2016, with bidders having until October 5 to submit their final proposals.

The winning bidder will also be allowed to construct a satellite casino and up to three slot parlors in the country.

Once the integrated resort is finally operational in the country, it will likely lead to a boost in tourism. The country could use a tourism catalyst, as tourism grew at a CAGR of only 3 percent from 2010 to 2014.

The country of Malta currently has four operating casinos. In 2015, these casinos welcomed over 781,000 visitors of which nearly 399,000 were non-Maltese. Additionally, the casinos generated approximately €36 million in GGR for the same year. One of Malta’s casinos, the Dragonara Casino, recently underwent a €10 million renovation. While the €10 million price tag for the upgrade may seem small, it included a new VIP lounge. Given the country’s picturesque scenery and mild climate, the Dragonara Casino does well in attracting high-end clientele.

On the regulatory side, Malta Gaming Authority’s chairman, Joseph Cuschieri, recently said the country’s Gaming Authority will be proposing new legislation in the coming months. This legislation will allow for complete governance of the gaming sector. Cuschieri explained in an interview that he sees Malta’s gaming industry “(being) much larger in 10 years’ time.”

The gaming landscape in Russia continues to go through dynamic changes. Recently, Tigre De Cristal, the only casino operating in the Primorye gaming zone, announced that VIP gambling turnover increased to $283 million in August after the casino signed new fixed-room deals with junket operators. This represents a nearly nine-times increase in monthly VIP turnover from November of last year when the casino officially opened.

Elsewhere, in May 2016, Russian President Vladimir Putin extended a shutdown order to January 1, 2019 for casinos operating in Azov-City. Even though the extension allows the casinos to remain operational for several more years, it reaffirms the government’s commitment to shift gaming activity for the region to Sochi.

The country of Georgia has approximately 14 operating casinos. Georgia has an attractive tax structure which creates an incentive for casinos in Georgia to grow by providing set annual and quarterly fees rather than taxing overall revenues. These fixed annual fees are conducive to larger facilities.

In development news, earlier this year, Melco International announced its decision to pull out of its planned casino inside the five-star Millennium Biltmore Hotel. More recently, Georgian media reported that Turkish President Recep Erdogan Tayyp has begun lobbying to close Georgian land-based casinos, many of which are located close to the Turkish border. In 2012, Turkey and Georgia relaxed travel restrictions on each other’s citizens. It remains unclear whether or not Tayyp will take any further action to mitigate Turkish gambling on Georgian soil. However, if the 2012 actions are reversed and more stringent travel policies are introduced, foreign visitation to Georgian casinos could suffer.

The gambling industry in Estonia is regulated by several laws. The two principal laws are the Law on Gambling from 1995 and the Law on Lottery from 1996. The State Fees Act from 1997 deals with fees for the gambling industry. Gambling Tax Law of 2004 regulates the taxation of gambling. In April 2009 the Estonian parliament, Riigikogu, adopted the new Gambling Tax which came into force on June 1. The new Gambling Law set stricter rules and higher financial and technical requirements for operators. Taxes on some forms of gambling were also increased.

In addition to the new gambling tax, the Gambling Act of 2009 was introduced to better regulate and control the Estonian gambling industry, which had grown into many small, widely dispersed gambling locations. This legislation required all slot halls and casinos to have at least 40 slot machines and five gaming tables. This act also led to the legalization of online gambling.

In development news, Olympic Entertainment Group opened its largest casino resort in Tallinn, Estonia earlier this year. The casino resort includes the 202-room Hilton Tallinn Park, which is the first Hilton hotel in the Baltic region.

As of 2014, the Czech Republic was home to approximately 108 casinos, containing approximately 2,155 slots and 331 tables. Nearly one-third of the country’s casinos are located in Prague, with approximately 681 slot machines and 104 tables. Since 2011, gaming revenue in the Czech Republic has declined at an average annual rate of 5.9 percent due to the increased popularity of VLT machines within the market. The Innovation Group expects this decrease to continue in the near future.

New gaming legislation was published in October 2014 and is set to be implemented in 2017, although it still requires approval from the Senate. This proposed law will raise the slot tax from 28 percent to 35 percent and require strict regulations on the registration of players. Additionally, it will open online gaming operations to foreign entities and give the Ministry of Finance the power to close any illegal facilities. 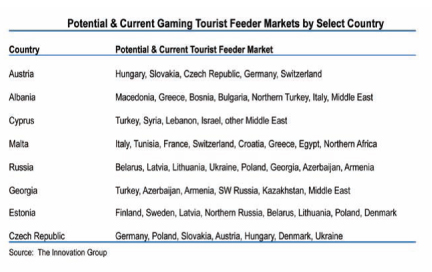 It is important to understand the current and potential tourist feeder markets that will service these highlighted countries specifically for casino visits. Tourists are most likely to be attracted to a gaming destination based on the geographic location, cultural similarities, safety of travel and casino product available, along with other factors.

The chart opposite illustrates the potential feeder markets to service these markets, taking into consideration the criteria noted earlier. For example, Albania will pull from Italy, Macedonia, Bosnia and the Middle East while at a lesser degree Northern Turkey, Bulgaria and Northern Greece. Many of these feeder markets are geographically close to Albania, while the Middle East is a good tourist fit because of Albania’s large secular Muslim population base.

Moving Forward: The Future of Gaming in Eastern Europe

The changes occurring in Eastern Europe discussed above will certainly lead to a new gaming landscape over the next decade. If and when Western-style gaming proliferates throughout the market, it is likely that both tourism and gross gaming revenue will increase at above-average rates. Just as the region is likely to receive influence from the West, it is also drawing from the East.

As the Innovation Group has previously noted, Eastern Europe will undoubtedly benefit from China’s commitment through its “16+1 platform” to build an “Economic Belt” along the historical Silk Road, a trans-Eurasian project from the Pacific Ocean to the Baltic Sea. While this initiative will likely result in broad economic development, it has already led to positive gaming-specific developments. As the Belt reaches into Europe, Asia-based gaming companies are beginning to position themselves accordingly.

As discussed throughout this article, there are many different ways that gaming in Eastern Europe can grow. We encourage operators and developers to continue to monitor the region and explore potential opportunities in this emerging gaming market.

As always, the Innovation Group will continue to keep our finger on the pulse of gaming-related developments within the region and help our clients capitalize on any current and future opportunities.