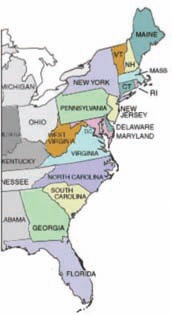 With California’s bid for online poker seemingly derailed for the near future, one analyst now expects the East Coast will lead the charge to expand online poker in the U.S.

Steve Ruddock, of pokerupdate.com, sees gambling possibly coming online in any of five mid-Atlantic states in the next few years. If online gaming is approved in one of these states, the others may follow, he says.

Here’s a rundown of his analysis of states likely to consider online gaming:

Massachusetts
Massachusetts may be currently fighting a ballot referendum looking to repeal the law passed in 2011 that allowed for brick-and-mortar casino expansion, but current State Treasurer and gubernatorial candidate Steve Grossman has been pushing the legislature for online gaming expansion, and speaking publicly about his desire for state-run expansion.

If Massachusetts does repeal its casino expansion, and if Grossman wins the governorship, it could mean a serious push to pass an online gambling bill in 2015. On the other hand, if the 2011 law is preserved, the state is likely to hold off on iGaming expansion until the brick-and-mortar casinos are up and running.

New York
A late push by outgoing state Senator John Bonacic and Assemblyman J. Gary Pretlow sparked the possibility of New York as a potential candidate for online gambling expansion in 2015. Much like Massachusetts, several New York legislators have stated their intention to have the brick-and-mortar expansion that is currently under way in the state fully set up before exploring online gambling. This could happen quickly, as the state’s casino plans are moving along as planned.

Pennsylvania
Pennsylvania seems the most likely 2015 adopter of online poker. The state legislature has held multiple hearings, commissioned internal and independent studies, and seems to have several legislators willing to sponsor iGaming bills.

The question with Pennsylvania is how influential Sheldon Adelson will be if the legislature gets serious—Adelson’s Las Vegas Sands Corp. owns the Sands Casino Resort Bethlehem in the state—and precisely where the Parx Casino comes down on this issue. Thus far, Parx has sent mixed messages, with Chairman Bob Green stating his concerns over online gambling, while Parx has teamed up with GameAccount Network and Joingo to create free play and mobile online gaming sites that could be converted to real-money sites.

Maryland
Maryland isn’t on many people’s iGaming radar, but the state is certainly capable of passing an online gambling bill. The director of the Maryland State Lottery and Gaming Control Agency, Stephen Martino, already publicly stated they are “mapping it out,” when he spoke at a Massachusetts forum on online gambling back in March.

West Virginia
The West Virginia Lottery is looking at online gaming in the hopes of boosting slumping revenue from the lottery and its casino industry.

Lottery Director John Musgrave and other lottery officials recently met with state casino executives to discuss an app that would let players buy Powerball, Mega Millions and Hot Lotto tickets on their smart phones, among other online options. Musgrave said online gambling could help stop the drop in lottery revenue at West Virginia’s four racinos, caused in part by new casinos in Maryland and Ohio. In July, the lottery posted total revenue of $101.1 million, down 4 percent from revenue of $105.4 million in July 2013. Revenue from the state’s four racinos dropped nearly 5 percent to $51.1 million from the previous July.