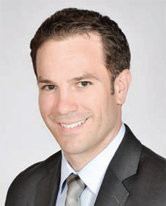 Michael Marino, senior vice president and chief experience officer at Caesars Entertainment, describes himself an avid sports fan and overall “experience seeker,” having traveled to more than 100 stadiums and arenas throughout his life.

He got an early start learning about customer behavior in entertainment—his father owned thoroughbred race horses as he was growing up in upstate New York, and he spent a lot of time at racetracks—but his first career moves were elsewhere. Only in hindsight is it easy to see how this former software engineer ended up in a senior leadership role at one of the largest entertainment companies in the world.

After graduating from the University of Virginia with a degree in computer science, Marino realized that his real passion was business. He spent the early part of his career at Capital One, where he built up his analytical skills and developed a keen interest in the relationship between consumer data and behavior. Not only did that lead to him earning an MBA, but also his eventual transition into gaming.

“When I was in business school, one-third of case studies in marketing were on Capital One and Caesars (formerly Harrah’s),” he says. “I already worked for Capital One, so I figured the next best place for me was Caesars.”

Gaming was also a natural fit since it was one of the first industries to collect customer data on a large scale and to develop marketing objectives based on customer preferences. At Capital One, his sales objective consisted of “getting the right product in front of the right customer, at the right time.” He accomplished that by using customer data to drive decisions. Now, he says, “I do the same thing; I just have more fun things to give a customer.”

With other consumer industries following suit in their pursuit of customers and their data, making your marketing voice heard and influencing customer behavior has become increasingly difficult. The challenge for marketing departments is learning to differentiate your product—not only from other casinos but from other entertainment choices as well.

Marino is proud that Caesars has always been a leader incorporating customer data into marketing efforts. “It’s a great brand, great culture, and all decisions are grounded in data.”

Marino links much of his success in gaming back to his early mentor, Rich Fairbank, co-founder and CEO of Capital One. Marino credits Fairbank for his ability of “seeing beyond the product he was selling” and “taking the core competencies that the company had developed for use in other areas” as he expanded the company from financing into banking.

In a similar vein, his advice for young professionals is to focus on developing transferable skills rather than deep product knowledge. He sees the industry expanding opportunities to newcomers and encourages his employees to perform outside of their traditional roles.

As he describes it, “If you only do ‘your job,’ you’ll never go beyond it.”