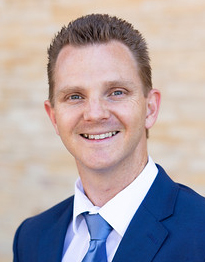 Don-Lee Hardy graduated from San Diego State University with a bachelor of science degree in criminal justice administration and big dreams to break into the criminal justice world, when his actual dream job was unexpectedly thrown into his lap. As he was waiting for his background checks at several law enforcement agencies to clear, he accepted a job working security at a local casino in the interim.

After a year of working in security, he transferred into surveillance and quickly realized how much he enjoyed working in this new realm. Hardy took great satisfaction in this particular field because of its expansive overview of all facets of casino operations.

In a few short years, he worked his way up from surveillance operator to department trainer, and again up to shift manager and the opportunity to build a department at a newly opening casino from the ground up. He did everything from hiring team members to forming policies and procedures, and in August 2019, he joined Sycuan Casino Resort as a safety specialist.

Hardy was quickly taken by the positive culture at Sycuan, which clearly trickled from the top down. He was impressed by the level of involvement that the tribal council members had in operations and making themselves available to team members. Describing Sycuan as “a great place to work,” Hardy notes their ambition to innovate, heartened by the fact that “because that’s how we’ve always done it” is not in their repertoire when it comes to creating and improving systems. With their willingness to try new strategies and take chances, they have consistently succeeded in improving quality for guests and team members alike.

The Covid-19 pandemic was perhaps the perfect illustration of a time when forward thinking had never been more crucial. With the unique challenges the pandemic brought, it also inspired new thinking, from team member and guest accountability, headcount, and overcrowding prevention, to the hiring of safety agents, and to the rearranging of events, restaurants, table games and slot machines. Guiding Sycuan’s best practices was an enormous ordeal, and the progressive approach of Hardy’s team was integral to the casino’s success.

When Hardy flashes back to the pivotal moment that had the greatest impact on his career, it was the jump from his comfort zone of surveillance to internal audit. This change was far different than what he had experienced previously, and helped him transition into the field of safety. In the safety world, the risks are higher due to factoring in the well-being of team members and guests. In internal audit, the focus is on ensuring strong controls and regulations, which he also takes very seriously.

This change involved a leap of faith on his part, but with the support he received from casino management and his drive to prove them right, he entered this new workspace with perseverance and an unshakeable work ethic. In addition to these character traits, Hardy’s interpersonal skills have benefited him throughout his career.

Well aware that “no one is excited to sit down with the internal audit guy,” he quickly established a line of open communication with the different departments, being careful to take an approach that was collaborative and not combative. When the departments and senior management saw his team player attitude and interest in helping them improve, the trust was established, and they now reach out to him regularly.

Hardy is a firm believer that drive, passion and relationship skills can carry a career to far lengths. His advice to all future emerging leaders is, “When you remove yourself from your comfort zone and what you think you know, you open yourself up to accomplishing even more than what you initially envisioned. Dream bigger and don’t settle.”