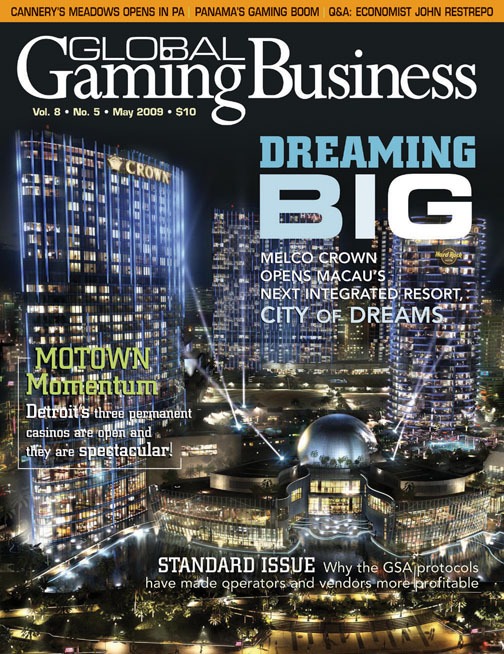 In a way, it’s a new beginning and the end of an era. When the City of Dreams debuts in June, the second casino resort developed by Melco Crown, the only remaining unopened development from Macau’s first big wave of casinos will be Wynn Macau’s Encore, scheduled to debut some time in 2010.

A partnership between Lawrence Ho, son of the original Macau gambling magnate Stanley Ho, and James Packer, son of the late Australian tycoon Kerry Packer, Melco Crown is betting its future on the success of City of Dreams. The company’s original development, Crown Macau, has had an up-and-down history since it opened in May 2007. For a time, it dominated the market, paying a higher commission to the all-important VIP operators, but when the government made a correction by capping commission payments, Crown Macau lost some market share, and now competes fiercely with Wynn, the Venetian and the SJM properties controlled by Stanley Ho.

“We know the pressure is on us,” Ho told Bloomberg Television in April. “The success of it will have major implications.”

Because the economy has slowed construction of other new casinos-Las Vegas Sands’ Cotai Strip development is on hold; Galaxy slowed to a crawl on its mega-resort; and Studio City Macau stopped dead-City of Dreams is likely the last of the full-blown mega-resorts to open before reality sets in.

For Greg Hawkins, the president of City of Dreams, the economy isn’t really an issue since the property was completely financed before the economic problems began. So he doesn’t expect the results to be altered too much.

“In terms of investor management, we’re being realistic,” he says. “We were fully financed before the downturn, so we were fortunate to be able to go with our original plans. We haven’t materially changed the direction of what we were building, so the basic elements of what will make us successful are still included.”

Hawkins is realistic, however, about the property’s potential visitors from China, given the visa restrictions that have been put in place since the start of City of Dreams construction.

“Operationally, we’re very conscious of the competitive conditions in China and Hong Kong, as well,” says Hawkins. “We’re looking at our strategic execution to ensure it’s aligned with the current market conditions. So from the operations perspective, we need to know that our cost basis will allow us to adapt to market conditions, and then hone the execution pieces to be really sharp so we can maximize the earnings potential.”

Ho believes that the economy has begun to bounce back in Macau, which took a hit last year when the visa restrictions severely reduced visitors from mainland China. He says the worst is over.

“In terms of China’s political matters, these are definitely out of our hands,” Ho said. “The bleakest days of the industry are past us, which was the fourth quarter.”

If the Venetian Macao is its immediate competition (and being directly across the street, it’s certainly in the neighborhood), City of Dreams matches it and more-starting with three hotels: a Crown tower, a Hard Rock Hotel and a Grand Hyatt.

“We’re trying to hit every demographic and price point with our room offerings,” says Hawkins.

“At the Crown Tower, we’re offering 300 absolutely spectacular rooms and suites. These will primarily be offered to the VIP market that we’ve developed, and we hope to continue to develop.

“At the Hard Rock, we’re looking to bring in a younger audience, with the rock ‘n’ roll lifestyle. In the casino, we’re making it a truly exciting atmosphere with the memorabilia for which Hard Rock is so well known, including items from Asian star Jacky Cheung. He’s probably best described as the Bruce Springsteen of Asia, and he’s very popular.

“And our third hotel, which should open in the third quarter of this year, is the Hyatt brand, which gives our customers that luxury they have become so accustomed to in the Asian market.”

The City of Dreams retail area, the “Boulevard,” will be unlike anything currently offered in Macau, says Hawkins.

“When you access the property, it doesn’t matter which way you come in, you’re immediately placed on the Boulevard, which runs around the outside of the property,” he explains. “That’s where all the retail is located. We’ve got a great selection of stores, a wide variety. We really want to look at the aggregation of the brands throughout the retail space so we can truly drive the casino experience. While this is undoubtedly a challenging market, we’re pleased with the take-up rate for our tenants.”

Phase One of the Boulevard comprises approximately 85,000 square feet of retail space developed in collaboration with retail operator DFS. The Boulevard will present “precincts,” which will group fashion ready-to-wear, accessories, jewelry, watches and beauty in distinct zones.

In the middle of the Boulevard will be the first “must-see” attraction in Macau, the “Bubble,” which will provide a totally immersive multimedia experience, unlike anything else that has been seen in Asia.

Designed and produced by U.S. entertainment group Falcon’s Treehouse, the production will combine high-definition video content, a sweeping musical score, over 29,000 theatrical LED lights and a variety of sensory effects to create a stirring multimedia extravaganza.

In addition to the Bubble, City of Dreams will offer a production show designed by Cirque de Soleil’s founder, Franco Dragone, and his new company, Dragone. The theater will be designed by world-renowned architects, the Pei Partnership of New York. Hawkins says the show will open before the end of 2009, and will be the final piece for phase one of City of Dreams.

At Crown Macau, the high-powered VIP company A-MAX has an exclusive arrangement to provide players to that property.

At City of Dreams, Hawkins says A-MAX will not be exclusive, but definitely part of the mix of VIP operators that will work with the property.

“The VIP market is a work in progress,” he says. “We’re talking with many operators about coming into City of Dreams. We’ve received a lot of inquiries about working with that, but we’re still sorting that out. We have a great executive handling that for us, Kelvin Tan. He’s very experienced and knowledgeable in this area.”

“While we expect to serve the VIP market as aggressively as we have at Crown Macau, we want to appeal to the mass market in a way no other property in Macau has,” he says. “The layout of the property, the marketing efforts, the entertainment offerings and the gaming will create a truly unique experience that they can only get at City of Dreams.

“We would like to expand the mass market, but we’d never ignore or de-emphasize the VIP market. We can do both very well.”

Formerly the CEO at Crown Macau, Hawkins says the company will be very careful not to cannibalize the market at that property to provide for City of Dreams. Crown Macau will be re-branded as “Altira Macau” with the Crown Macau brand re-emerging at the City of Dreams.

“The relationship will be very synergistic,” he says. “Obviously the approach, with two operating casino properties, would be to work together. Crown Macau focuses on that VIP market. At City of Dreams, we’ll focus on new junket partners trying to get an aggregate for the two properties with the goal of adding incremental rather than competing with each other.”

Even though City of Dreams offers amenities and the “wow” factor, Hawkins is very cognizant that service will make the difference between his property and the rest of Macau.

“One of the real challenges and objectives is to have a service experience that is distinct and at the top end of the market,” he says. “One of our programs, called ‘Dream Service,’ captures the core elements of what we want our team members to provide to create a consistent service experience. It’s a very strong focus and at the center of our attention.”

To provide that service, City of Dreams has had access to an expanding pool of employees. It was expected to be very thin, but the economy, in this case, worked in his favor, according to Hawkins.

“Phase one of the project, we’ll need about 7,000 team members on board,” he says. “The labor situation has changed quite a bit from even 12 or 18 months ago. Since we’ve been recruiting at a time when there isn’t a lot of other capacity coming on stream, we’ve been able to offer a lot of career promotional opportunities to our applicants. We’re certainly happy with the quality. So I’m fairly confident we’ll have a great operational team, even later on when we are fully staffed.”

For Hawkins, the opening of City of Dreams in June will be welcome after spending two years in preparation. He gives credit to Lawrence Ho for his leadership and direction.

“Lawrence really has been the visionary for the project,” he says. “From the start, he really has had a superb understanding of the market, and that has been the guiding principle that has gotten us to where we are today. He’s very hands-on, and has great input to every area of decision-making. I think this property really has the capacity to balance the Eastern and Western cultures in such a way that everyone is comfortable.”

Hawkins says he and his team have been vital contributors, but it’s Ho who has been the one to make the final decisions.

“Lawrence has been a great boss,” says Hawkins. “He’s very approachable and understanding. Like every good leader, he’s got the ability to listen but also to address as required.”

But Hawkins is anxious to see the reactions of his guests.

“It has been a very rewarding process,” he says. “Our relationship with our design team has been outstanding, and now that we’re less than two months out, we’re really looking forward to getting the reaction of the public and our customers.”