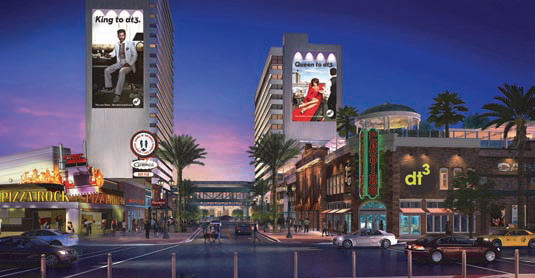 The new Downtown Grand in Las Vegas “is already becoming a game-changer for the neighborhood,” according to a report in USA Today.

The 634-room hotel-casino, which marked its soft opening in late October, was designed to interact with the surrounding neighborhood, not lure people in and close the door, said CEO Seth Schorr. Casinos on the Las Vegas Strip are “designed to keep guests in the building,” Schorr said. “We do the opposite. We encourage our guests to leave the casino.”

Downtown Las Vegas has undergone a marked renaissance in recent years with the introduction of an outdoor entertainment corridor with bars and music; another new casino resort, the D Las Vegas, formerly Fitzgeralds; a renovated Golden Gate casino; and a steady migration of new businesses, principally online retail giant Zappos, which relocated its headquarters from Henderson to a former City Hall building. Zappos brought some 1,300 new employees to the Downtown region, many of whom plan to live there.

The Downtown Grand?formerly the Lady Luck?held its grand opening November 12, but it has already won some big money from big-name players. Casino magnate Steve Wynn lost $5,000 at the craps table during the soft opening, and Seth Schorr’s father Marc, the former president of Wynn Resorts, also dropped a cool five grand.