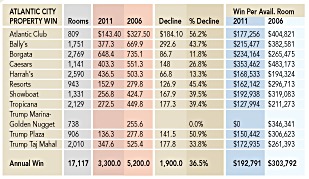 The typical Atlantic City casino, of under 1,000 rooms, has as much casino equipment, slots and tables, as a 3,000- to 4,000-room Las Vegas resort. This size might have been appropriate when Atlantic City was an Eastern monopoly, and counted millions of mid-week, same-day visitors. They came by car, when gas was under per gallon, or by line-run buses, up to 14 million of them.

But the mid-week visitors no longer need to drive five to seven hours round-trip from North Jersey or New York City, or three to five hours from various communities around Philadelphia. They now have convenient casinos in Bensalem, Bethlehem and the Poconos, or racinos at Aqueduct and Yonkers, with the round-trip commute no more than an hour or two. And time is definitely important to a mid-week player who has to be at work the next morning.

Atlantic City needs to change its image from a “casino resort” to a “resort with casinos,” like Biloxi, the Bahamas or Puerto Rico. And these large, empty spaces in an Atlantic City casino mid-week need to be downsized, or at least sectionalized so parts of the gaming floor can be hidden behind curtains or movable walls. That way, operators can portray the appearance of a crowded casino.

I had a serious argument with Donald Trump, when he was chairman of Resorts International and we were building the Taj Mahal. I wanted the enormous casino floor divided into blind sections, so the entire casino was not visible from any point. Trump disagreed, and the casino floor—even today—allows you to see an empty floor, most of the time mid-week, even during the evenings.

This bifurcated concept was perfected by Steve Wynn when he later (1989) opened the Mirage in Vegas. His design allowed you to only see small sections of the casino from any vantage point. Curved walls and attractive false ceilings over the table games (with lighting and surveillance cameras) blocked your view. So even in the morning, the casino floor looked busy. Even today, he uses this design concept in his casinos.

Atlantic City needs to accept facts—that one of its casinos today needs few more tables and slots than required to accommodate its own hotel guests, with some variance for those AC casinos that can handle large shows or special events.

Some of the excess casino area could be designated for conversion to convention, function or retail purposes. There is no bigger downer than an empty casino. And today in Atlantic City, especially in the morning hours mid-week, this is the rule, not the exception.

Taking my argument a step further, let’s look at the Las Vegas Sands second-quarter financials. The LVS casino in Bethlehem that is one of the Pennsylvania casinos taking Atlantic City’s previous customer base, and the comparison or revenue per available room (REVPAR) is instructive to Atlantic City.

The Venetian/Palazzo casino in Las Vegas is on pace to win $54,200 per available room in 2012, on pace for $380 million in casino revenues. The Venetian and Palazzo are primarily dependent on hotel guests, conventioneers, high-end players and regular FIT (free independent traveler) customers, staying in their 7,000 rooms.

Bethlehem, on the other hand, depends almost exclusively on day trips from nearby population, and is on pace to reach $430 million with only 300 rooms. This equates to $1.4 million per available room, or 26 times that of its sister properties in Vegas.

Obviously, rooms have nothing to do with Bethlehem’s success, just like resort rooms had little to do with Atlantic City’s early successes. Atlantic City’s downfall did not start until Pennsylvania approved slots in 2006 and then New York added them to racetracks.

All Is Not Lost

Yet, this amount is still three times the win per available room at the very successful Venetian/ Palazzo in Las Vegas. This clearly demonstrates that AC casinos are still very dependent on drive-in visitors.

Unfortunately, this chart doesn’t paint the entire picture, because much of the remaining win in 2011 and the continuing decline in 2012 have depended on more and more inducements in free play, complimentary meals, drinks and rooms, and other giveaways. The smaller, more marginal properties have lost over 50 percent of their casino play, and the casino department contribution to EBITDA is down even further.

So, Atlantic City needs to replace comp and discounted casino customers with attendees from

conventions, corporate meetings, association events, and medium-sized trade shows, in addition to inducing visitors from new markets that do not offer casino gaming. By doing this, the city can can increase hotel demand (increasing average occupancy and room rates), which will increase hotel profitability and hopefully increase casino play from new visitors, who won’t require the same kinds of inducements as our previous customer strongholds in Pennsylvania, New York and New Jersey.