What will happen when you can buy a lottery ticket on your smartphone? 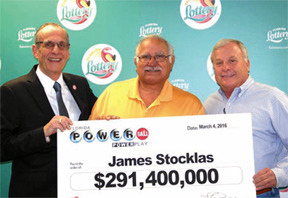 When big lottery jackpots come up for grabs—like the record-shattering .6 billion Powerball prize awarded last January—even non-gamblers line up for a chance to strike it rich. Who hasn’t daydreamed about bagging the big prize, holding the giant check, winning millions of bucks and hundreds of new-found friends?

In the U.S., more often than not, those instant millionaires bought their tickets from convenience stores or other retailers. That may seem downright quaint in the ecommerce era, but since 2011, when the U.S. Department of Justice ruled that online lotteries do not violate the Federal Wire Act (the snag that’s kept sports betting illegal almost everywhere), only six states have legalized online lottery games.

“Many were saying that lottery games were going to be on your mobile phone in the next two years,” says Jim Kennedy, executive vice president and group chief executive of lottery for Scientific Games. “When you start hearing conventional wisdom passed around like an old piece of fruitcake, you have to be very skeptical.”

The slow rollout has been tied to concerns about player protection and online security (or insecurity), as well as fears that too-easy access to gambling will cause some people to literally bet the farm.

Kennedy says those concerns are overblown. “We have the ability to provide the necessary protections and controls. Scientific Games’ technology is already well-established. So this is not a technical issue for us as a lottery technology provider. It is much more of a regulatory and policy question.”

Paul Riley, vice president of product innovation and R&D at IGT, agrees. “Being concerned about interactive wagering is an oxymoron, because you never have more control than when people are registering and you’re tracking absolutely everything they do. Lotteries can set up wagering and deposit thresholds and also allow players to set their own. They allow player self-exclusion. That’s basic 101 functionality in the interactive space—you have far more control to help people help themselves.”

Another problem for online lottery may be the sheer success of retail sales—the old “if it ain’t broke” mentality.

“Selling over the internet has just been slow to move, and in the places where it’s moved, it’s been relatively tepid,” says Riley. “”We can’t ignore the power of learned behavior, or the success of buying lottery at bricks-and-mortar retailers.”

One of the great appeals of lottery is its “simplicity,” says Kennedy. “That little scratch-off game you think would have gone the way of the eight-track tape is still the largest contributor to the growth of lotteries in U.S. Last year alone, it grew over $3 billion year-on-year, and last year’s number was $43 billion in scratch-off tickets. The run rate for Powerball and Mega Millions was in the neighborhood of about $9 billion. So the scratch-off ticket, in all its immediacy and simplicity, seems to fundamentally capture the imagination of players.”

As lotteries move toward a more digital environment, providers are adding free apps and free-to-play games to goose the games and build up player rolls ahead of online lottery regulation.

“You can add extra features to your interactive mobile products like second-chance drawings and loyalty rewards,” says Kennedy. “We supply most of the instant products to the New Jersey Lottery. Just go online and take a look at their offers and you’ll see this mix of excitement and simplicity, which is kind of the sweet spot. What we’re seeing is the marriage of technology to lottery, and how technology makes it easier for retailers to sell the product and easier for the consumer to see and get access to the product. When you marry that to peoples’ sixth sense—their mobile device—you can create a window into that product using technology like augmented reality and smart apps, interactive loyalty programs and interactive promotions. This is really where I see lottery heading: a use of in-store and mobile technology to surround the product, making it more exciting and more convenient to play.”

There is precedent for the slow adoption of online lottery technology; European jurisdictions, now well established online, dipped in their toes before taking the big dive. “Veikkaus (the Finnish Lottery) is approaching 50 percent of sales on interactive channels rather than bricks-and-mortar,” observes Riley. “In the U.S., only a few jurisdictions—Illinois, Georgia, Michigan—are doing full iLottery, and Kentucky just started. But the international jurisdictions also started small and grew. It’s going to take time, but we’ve got to follow the consumers, who are used to ecommerce. One of the areas we’re keenly focused on is mobile, because it’s become everything to consumers—our news feed, our payment mechanism, our identity.”

He foresees the day lottery tickets are routinely sold on existing retail infrastructure. “So in a large retailer multilane environment you could go down every aisle, grab a little fob and scan a lottery ticket like you scan Slim Jims. We’re working hard to try to get those standardized APIs (application program interfaces) set up so we can approach the retail industry and say, ‘Hey, you can actually sell lottery on your existing retail equipment.’ It would be a win-win for everybody.”

The industry is also testing cashless sales, which may require a major upfront investment but would pay off later. And digital in-store sales technologies—dedicated channels available to consumers on mobile devices only inside the store—could also be in the offing.

The U.S. lottery industry does about $70 billion in sales across 200,000 retailers, says Kennedy. “To put this in perspective, I think the music industry did about $10 billion last year. So you can get very excited about a Candy Crush game that might generate $1.2 billion in total sales, but when lottery already has a $70 billion base, you want to take that enormous business and make games more entertaining and easier to interact with. You want to create a relationship with a player, rather than a transaction.”