An epidemic that threatens the viability of casino operations 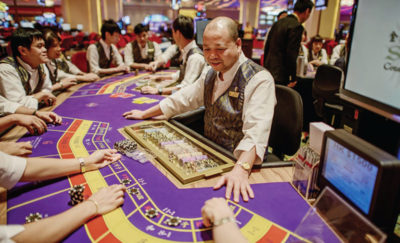 Discounts on loss, while once rarely used and then only to encourage faster pay on credit losses, have become the marketing tool of choice to attract the premium player. The use of the tool has grown exponentially in the last 30 years. Now, virtually every major U.S. casino that targets premium customers from Connecticut to Las Vegas, Las Vegas to Monaco, Atlantic City to the Caribbean, routinely offers players discounts on their losses.

Unfortunately, few casinos know the true cost of discounts, or how to style a program properly so as to maintain an acceptable profit margin. This lack of knowledge results in programs where the players actually have an advantage over the casino, or such a small disadvantage that the volatility of wins/losses does not justify this miniscule edge.

This misuse of player discounts is an existential threat to the profit margins once realized from the premium player.

It’s not uncommon for casino marketing executives to give the premium player a rule modification, as an enticement, that decreases the casino’s advantage. They consider it a “volume discount.” For example, a casino with double-zero roulette wheels may offer the player a single-zero game by simply calling a double-zero spin a no spin. This modification reduces the game’s advantage from 5.26 percent to 2.7 percent—effectively earning the same from a $1,000-per-spin single-zero player as a $5,133-per-spin double-zero wheel player.

In Asia, the premium players are offered the “rolling program” whereby management controls how much of the game’s advantage they are returning in the form of a rolling premium. Casinos can offer the baccarat bettor a 4 percent commission on banker bets instead of the customary 5 percent, which decreases the casino’s advantage by about 50 percent.

The one thing the above-mentioned rule modifications have in common is that the casino knows how much they are returning to the player in casino advantage as a result of the modification. With discounts, management has little or no idea how the discount offered affects the game’s edge over the bettor. Granted, a 15 percent discount on loss sure sounds like a 15 percent cost. Not so.

Executives often say that they like discounts because they only give the discount when the player loses. That belief is part of the problem. A discount-on-loss player receives the benefit of the discount regardless of winning or losing. For example, what if during a play session in the above roulette example, the ball never dropped in the double-zero pocket? Would you think the casino’s advantage must have been earning at the double zero rate since the double zero never came into play? No, because every spin “it could have.”

The same with discounts on losses—the bettor is playing with a decreased game disadvantage or even an advantage. The player benefits from the discount even when he wins because he “could” have lost. Consequently, he is playing a decreased disadvantage game. How much? That disadvantage is controlled by the player, not the casino.

When a bettor plays a specific number of hands comprised of various bet sizes, there is a multitude of possible outcomes. The player can lose a little or lose a lot and all the outcomes in between. The average of all these possible outcomes is the same value as the theoretical casino win. With discounts, only the losing trips are discounted by some arbitrary percentage.

Consequently, the game has a new average and therefore a new theoretical casino win. Just decreasing the losing trips by, as an example, 15 percent, does not decrease the average by 15 percent. Compare two $500 bettors. One bets $500 every hand for 1,000 hands while the other bets 500 hands at $1 and 500 hands at $999. Both have the same average bet and same theoretical win but the second bettor has huge wins and losses. The discount only decreases the losing trips and, consequently, the second bettor’s reduction in the game’s disadvantage is much greater than the flat bettor’s cost.

Magician’s tricks are dependent upon misdirection. That is, focusing the audience to look at something else. With discounts, the casino marketer depends on management looking at the player loss instead of what actually matters: the theoretical win after the discount. Casino marketers believe—falsely—that whatever a player lost is theirs to keep. However, if the casino won more than the theoretical advantage, the overages are simply being held in escrow for the same or another player to win. The same when a player wins; that player or someone in the public will balance the game’s books. Regardless of how you manage a game, if the advantage is 5.26 percent over the player as in roulette, the long run win will approximate the theoretical win. Management cannot control wins or losses, but they can influence the theoretical win, that’s all.

In this age of discounts, math has been thrown out the window. In this new bizarre world, what we offer the player is driven by what our competitors offer the player: math be damned. The casino has no idea of how the deal affects the casino advantage. Basically, the discount bettor is in control of what his disadvantage is. The casino often installs hurdles in the hopes of earning something. For instance, requiring 12 hours of play before receiving the discount. However, casino hosts will argue with senior management that the player experienced a “quick loss” and should receive the promised discount. Their justification, “that’s what the other casinos do.” The tail is now wagging the dog.

The combination of total hands played, the volatility of betting, the discount percentage, and the amount lost determine the discount’s reduction in casino advantage against the player. With discounts, the amount of the decrease is controlled by the player, not the casino. Premium players are often represented by agents who negotiate the “deal” and, unfortunately for management, know more about the mathematics of the game than the casino executive. A knowledgeable agent combined with a naïve marketing executive only spells disaster regardless of what the other casinos are offering.

Every casino has a management system that attempts to calculate the theoretical win per player. Some casinos will use the system-calculated theoretical win and decrease it by the amount of discount returned in the belief that this is a true representation of the player’s after-discount profitability. This approach is useless, other than providing false assurance that a player is more profitable than he is. The bettor has decreased his theoretical disadvantage by his betting volatility and total hands played. By how much, they don’t know.

Objective discount programs can be developed whereby the casino has some control over the game’s advantage against discount players. However, it requires a different mindset, control and bet tracking. Unfortunately, casinos will do what they have always done; they will mimic or better their competitor’s deals.

When casino marketers only offered modifications with known casino advantages, this was plausible. With discounts, it’s not. Can anyone imagine a car salesman who does not know how much is the lowest he can accept for the auto? With discounts, it’s based on what the competition is offering. If casinos drew a line in the sand and said, “We will not offer any deal better than break-even for the discount player,” they would actually be improving their bottom line.

Many of today’s casino executives believe the math only gets in the way. Several years ago, the old Sahara decided to offer baccarat with no commission. Same game but no commission. With this modification, the banker bettor had the same advantage with their banker bets as the casino had against the player bets. That is, instead of banker 1.06 percent disadvantage, the bettors had a 1.24 percent advantage.

This was not done as a promotion, this was done out of ignorance. In the short run, the casino manager actually believed his idea was working. Needless to say, it didn’t take long for the smart players to capitalize on management’s foolishness. This is akin to paying 38-to-1 in roulette with only 38 possibilities. In the short run the casino can easily have winning days but, in the long run, the mathematics will prove the game is a loser to the casino.

To further complicate things, Wall Street often monitors a casino’s win per unit. The discount on loss is hidden in the financials. Consequently, if management identifies a losing program and adjusts it so that the non-profitable program results in more overall profit but less win, the win per unit decreases.

Discounts on loss have grown to epidemic proportions and will continue to grow unless and until management sees that math governs the game: not how much the player lost. From the days of Bugsy Siegel until the late 1980s, the casinos generally knew their approximate edge over the player. With discounts, that edge is unknown, and that lack of knowledge and understanding is a threat to that once-cherished segment called the premium player.