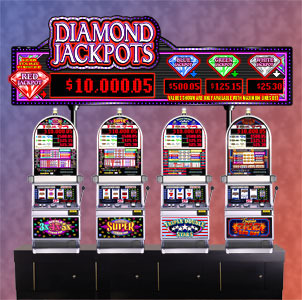 With this game, IGT reminds us it can still put out a solid new game in the tried-and-true stepper genre.

Diamond Jackpots is a four-level progressive slot, with a unique twist-players have the option of wagering one coin and still qualify for at least one of the progressive jackpots. Of course, it’s clearly communicated on the slot glass that a max bet is required to qualify for all of the jackpots.

The base games in the link are four classic IGT reel-spinners-Triple Red Hot 7s, Triple Double Stars, Double Times Pay 3X4X5X and Super Times Pay. All of these games have multiplying wild symbols in the single-line, stand-alone versions.

These are five-line or nine-line versions of the game, each with one payline activated per credit wagered. The top jackpot combinations on each game rise according to the payline on which they hit-the fifth coin wagered activates the payline with the highest possible jackpot for lining up three of the individual game’s wild symbols on the five-line version (the ninth coin on the nine-line version).

There is an LCD screen representing a fourth, bonus reel. The reel contains multiplier amounts that are applied to line jackpots, and different-colored diamonds. When three bonus symbols appear scattered on the primary reels, the bonus fourth reel is activated, multiplying any jackpots on the primary reels.

When three “Diamond Jackpots” symbols appear on the primary reels in any position, with a diamond on the fourth reel, one of the progressives is won, the level corresponding to the color of the diamond-white, green, blue or red.

Using the manufacturer’s recommended jackpot levels (the casino can alter the levels; they are in-house jackpots), the White Jackpot resets at $100, the Green Jackpot at $500, the Blue Jackpot at $2,000 and the top Red Jackpot at $40,000.

The game is designed as a traditional reel-spinner, and is recommended for placement in quarters or dollars.