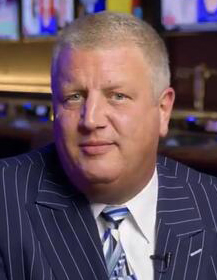 Derek Stevens arrived in Las Vegas in 2006 when he and his brother purchased the Golden Gate casino at the entrance to Fremont Street. A few years later, they added the former Fitzgerald’s casino, now known as the “D” casino hotel. And just last year, Stevens opened the crown jewel of his properties, the first brand new casino on Fremont Street in more than 50 years, the Circa Resort Casino. Circa features the world’s largest sports book and a pool experience unlike anything in the world. GGB Publisher Roger Gros sat down with Stevens at his offices in Circa in February. (See video below).

GGB: How has Circa performed since you opened in the midst of the pandemic? Has it hit your benchmarks?

Derek Stevens: Everything has played out pretty well overall. This was a five-year project, and when the pandemic hit in March of 2020, we knew we were going to be opening in 2020. So we couldn’t halt a project when you’re 85 percent of the way done. In retrospect, I feel very fortunate that we didn’t halt. We were never really going to, but those questions came up from lawyers and other bankers and folks like that. We really never considered it. But in retrospect, if we would have held off, what a calamity that would have been for a lot of different reasons.

First, the last eight months of the build we had to procure quite a bit of material. We would have had to let our staff go, and if you don’t have a crew, you can’t just snap your fingers and round up the team again. Then we would have had massive, massive supply chain issues. If we had shut down, the actual cost of the project would have probably increased a couple hundred million dollars, and the big thing is, we probably couldn’t get it done in three years.

Operationally, we did just fine. And we had a big, big step that happened in September last year, and we were able to refinance our original construction loan, and turn it into a normal conforming bank loan. That’s a real big step for an organization like ours because we effectively reduced our interest rate by 8 percent. Everybody understands what it’s like to refi your mortgage at a lower rate.

Your sportsbook was the talk of the town when you first opened, along with the pools. What kind of reaction did you get from your customers when they first showed up, and has it continued to really do well?

Everything we designed here is (because) we really wanted to create those “wow” moments. And the world’s largest sportsbook is one of them. When you come out of the door at Legacy Club on the roof, that’s another “wow” moment. And then when you walk into Stadium Swim, you get that “wow” moment. That’s how we designed them, and they’re working out as they were designed. So, it’s been great.

Circa Sports also runs the sportsbooks at Joe DeSimone’s Pass casino in Henderson and the Tuscany. Has that been working out for you?

Yes, at the Pass it gives some customers the flexibility, if you happen to live in that area, to pop in. Our location at Tuscany has been really just outstanding, to go along with our three here Downtown. We’re looking forward to adding another location here shortly.

How is Circa Sports performing in states where you’re operating it?

Right now, we’re in Colorado and Iowa, and we’ll soon be in several other states. It’s going great there and we expect to become a respected brand in the sports betting world very quickly.

In terms of the hotel, is your occupancy rate what you projected?

Yes, since the day we opened. I mean our ADR is a little higher than what we thought we would be able to get, and the occupancy has been great. The bookings have been solid, and I’m back to the old days, where I can’t wait to go to my casino host meeting tomorrow. That’s full of arguments, because we don’t have enough suites.

It’s been kind of a chilly winter here in Vegas this year. Has the pool concept worked as you thought it would when you first started?

When it’s cold and windy in Vegas—which doesn’t happen all that often—it can get pretty chilly. But when it’s cold and windy, and you’re in the water, you hold your beer at your neck level; it’s beautiful. Let’s say there’s a big hockey game, or a basketball game on, and there’s a lot of people at the pool. With the dark sky in Vegas, and that big 143-foot screen, and you’re hanging around with some friends, it’s pretty cool to be out in a body of water in Vegas watching a great game.

What’s next for you? Are you happy Downtown? Are you interested in ever looking at the Strip or beyond?

When I first bought the first property on this square block where Circa is now, the Las Vegas Club, that was August of 2015. It took five years trying to get this up and going. And remember, I’m really not a developer. I’m an operator. And I’m proud to say I’m an operator. So after five years on the development side I’m just enjoying operating this property.

We just finished our first year. So, I’ve only gotten one lap under my belt here. One Super Bowl, one March Madness. I’m looking forward to having the opportunity to say, “OK, we’ve done this once. Now make it better.” We’re all about continuous improvement, and I’m going to enjoy operating here.