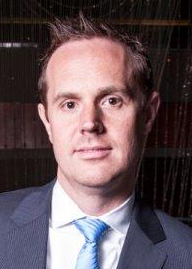 As vice president of digital sports for Caesars Interactive Entertainment, Kevin Fulmer prepared for the bettors’ paradise that is March Madness.

Then poof, it was wiped out by a germ.

“One day we’re getting ready for the NCAA Men’s Basketball tournament and all that comes with it, and the next we’re looking at offering wagers on table tennis in Eastern Europe,” he says. “Quite the change!”

Fulmer didn’t bargain for a global pandemic when he took the position in January 2018. But as Nina Simone once sang, “Life has its problems and I get my share.”

“It’s been an adjustment from going into the office every day to working from home,” he says. “Sharing my workspace with my wife is something I never thought I’d have to do, but I’m grateful we’re both healthy.”

Fulmer grew up in Brigantine, just across the Absecon Inlet from Atlantic City. His father, also named Kevin, worked for Bally’s for almost 30 years. The business is in his blood.

“As soon as I could legally do so, I was working in a casino,” he says. “I started as a valet attendant at Caesars Atlantic City.”

After graduation from Providence College in 2004 with a B.S. in finance, Fulmer landed a job at Bellagio in Las Vegas, and worked there until 2008 as compensation manager and financial manager. He spent more than three years at Aria Resort & Casino and several more at the Cosmopolitan of Las Vegas, where he served as senior director of slot operations and then vice president of casino marketing, among other posts.

At Caesars, Fulmer has a dual responsibility in retail and online sports. “With Covid-19 and the casinos temporarily closed, attention has shifted online. We’re working on launching online sports in new jurisdictions.”

His team recently unveiled Caesars Online Sports in Pennsylvania, and expects to add more jurisdictions in the near future. “I focus a lot of time on our partnerships with ESPN and Bleacher Report, as well as developing policies and procedures and risk management oversight for retail and online.”

In addition to his father, Fulmer counts Bill McBeath as one of the first mentors who helped along the way.

“I worked for Bill for 10-plus years, starting my career with Bellagio, then Aria and most recently at Cosmopolitan. Every conversation I’ve had, I’ve learned something new,” he says.

Another instrumental person is Michael Peltyn. “I appreciated his leadership and his ability to prioritize. Over time I’ve enjoyed our friendship.”

Christian Stuart and Melanie Gross at Caesars Entertainment also played integral roles in Fulmer’s career. “The way they pivoted and changed focus after the Supreme Court’s ruling to permit sports betting was remarkable,” says Fulmer, who’s a big sports fan—loves the Golden Knights, and still roots for the Eagles.

Sports betting will grow, Fulmer says, with the majority of states legalizing it.

“I think it will be commonplace in daily lives. You’ll see more mainstream media and sports broadcasters including wager terminology that was taboo for national television in the past.”

Opportunities abound for new entrants in the industry, and he tells them first and foremost, never to be afraid to ask questions. “Ask the whys,” he says, “and push to understand the reasoning behind the logic.”