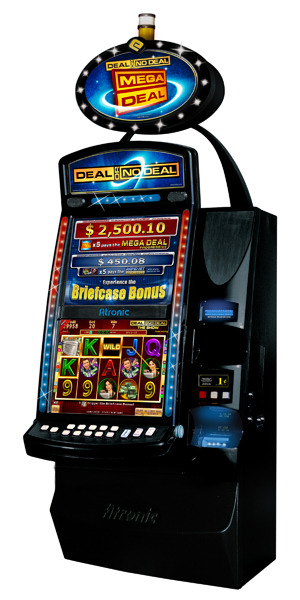 This game combines two very successful former versions of the series of slots based on the popular Deal Or No Deal TV game show, and adds, for the first time, a wide-area progressive jackpot and a secondary progressive.

In the base game, players can choose between “Line Mode” and “Super Play,” according to the number of paylines activated. The player has the option to activate one, five, 10 or 20 lines with at least a single coin per line, which triggers the Line Mode, and normal multi-line video play. Activating all 25 lines triggers Super Play, in which all wins are paid as left-to-right scatters. (At press time, Super Play was not yet approved in Nevada.)

The Deal Or No Deal logo is wild on all but the first reel, substituting for all but the briefcase symbol.

There are two levels of progressive. Five Mega Deal symbols win the top “Mega Deal Progressive,” which resets at $50,000. Five money or phone symbols trigger the secondary “Rapid Hit Progressive,” resetting at $30,000. Max bet is required to qualify for these progressives.

Finally, like all other games in this series, this slot includes the central “Briefcase Bonus.” This is the main feature of the TV game show. The game show screen appears, showing 20 suitcases, each containing a different credit amount. The player is shown a list of the amounts hidden in the suitcases.