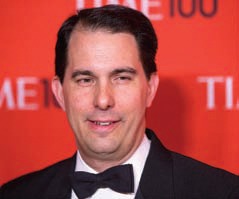 Wisconsin Governor Scott Walker and the Forest County Potawatomi recently signed an amendment to their 2005 gaming compact that would require the state to pay the tribe for any losses to its Milwaukee Bingo & Casino if the Menominee Nation is allowed to open its proposed 0 million off-reservation Hard Rock Casino at the former Dairyland Greyhound Park in nearby Kenosha. The arbitration was required by the state’s compact with the Potawatomi tribe.

Walker alerted the Bureau of Indian Affairs that the agreement does not indicate whether or not he will approve the Kenosha project. The BIA has 45 days to accept the amendment, reject it or take no action, which essentially would amount to approval. The BIA approved the Kenosha casino last year, but Walker has the final say on it and has until February 19 to announce his decision.

Attorney R. Lance Boldrey was hired by Walker to handle the dispute between the Potawatomi tribe and the state. In a letter to Assistant Secretary of Interior for Indian Affairs Kevin Washburn, Boldrey stated Walker may not have the authority to establish annual state spending obligations, and that the deal may violate Wisconsin’s constitution. “I write today to inform you that, although Governor Walker has signed the proposed amendment to the compact, the state has concerns with regard to its terms,” Boldrey stated.

The Potawatomi tribe has withheld its $25 million annual payment to the state due to concern the state will end up owing the tribe if the Kenosha casino is approved. Also, under the compact amendment, the state would have to refund the tribe up to $100 million. Potawatomi Attorney General Jeff Crawford said the tribe continues to oppose the Kenosha project and “believes Governor Walker will ultimately find that this project is not in the best interest of Wisconsin.”

The Menominee tribe issued a statement that it was pleased with the arbitration and that completing the process removes a major hurdle the governor faced before granting final approval. The tribe repeatedly has offered to make the reimbursement payments to the Potawatomi, which won $400 million at its Milwaukee casino last year.