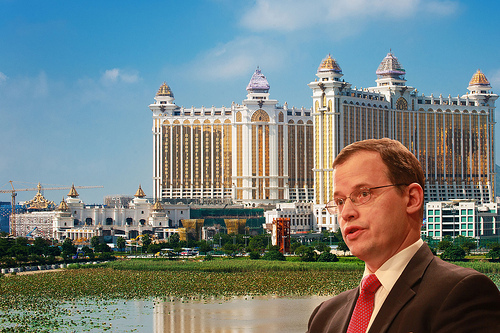 Galaxy Entertainment is ramping up for the early 2011 debut of its flagship casino resort, Galaxy Macau. The property is located in the Cotai section of the SAR, and includes all the non-gaming amenities enjoyed by its neighbors, the Venetian/Four Seasons Macao and City of Dreams. What it hopes to attain as well is an increase in market share and EBIDTA, according to Galaxy CFO Bob Drake.

“We think we are well positioned in the world’s fastest-growing market,” he says. “We’ve had a great run so far, but all the operators have done well here. A rising tide lifts all boats. We remain very positive about the market and are confident that the best is yet to come.”

For Drake, the challenging job started almost three years ago when he left his position as vice president of finance for Harrah’s Entertainment Western Division. From watching over the finances at the Las Vegas properties for the company, Drake jumped into a world where growth was contagious and Galaxy was driving to become a major operator in Macau. It had just opened its StarWorld Casino Resort, which contained a collection of VIP rooms along with hotel rooms and a mass-market casino.

As a Chinese company, both the corporate culture and the economic conditions were different for Drake. He has been immersed in the subject since then, and recognizes the opportunities for Galaxy.

“After Galaxy Macau opens in 2011 and the LV Sands sites 5 and 6 late this year or early in 2012, that’s it for quite a while,” he says. “The government is very conscious about how it wants to control the growth of the market, and is doing a good job so far.”

Like the Macau government, the Chinese government is also trying to control its explosive economic growth.

“They are looking to provide sustainable growth,” says Drake. “When they try to regulate the growth of loans by increasing interest rates, they want to moderate growth in a controlled fashion so they don’t create bubbles and actually grow gradually over time.”

And growth is exactly what is happening for Galaxy Entertainment. After the debut of Galaxy Macau, Drake says it’s still not over.

“We have a growth pipeline,” he says. “We have 15 million more square feet to develop in this city. The transition for me from a mature company with Harrah’s to a growth company with Galaxy has been very exciting, and the future is very bright.”

While the market in Macau is currently pure gaming, the government has encouraged operators there to develop non-gaming amentities to attract more tourism and visitors who are interested in things other than gaming. As an integrated resort, Galaxy Macau joins its neighbors in that quest.

“We think we positioned the property so it will grow the market,” he says. “It’s different from the other facilities. It’s very Asian-centric from the architecture to the entertainment to food and beverage. It is positioned differently than the other resorts in Cotai. Our podium features the world’s largest wave pool, so we think Galaxy Macau will help grow the mass segment of the market. Along with the other two properties, we have now created a critical mass that will encourage visitors to come to Macau for more than just gaming.”