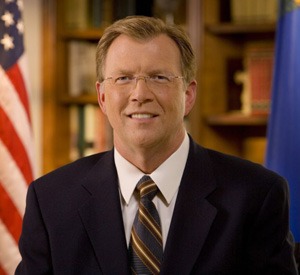 Jon Porter was installed as the first representative of Nevada’s newly created Third District in January 2003. The district includes parts of metropolitan Las Vegas, all of Henderson and Boulder City. Porter is a member of, or has served on, several committees in the House of Representatives: Ways and Means, Budget, Education and the Workforce, Transportation and Infrastructure and Government Reform. Formerly an elected official in Boulder City, Porter was elected to the Nevada Senate in 1994. Despite coming from the only city in Nevada without gaming (Boulder City), Porter has a keen understanding of the importance of the state’s casino and tourism industry. His ability to represent both the industry executives and its employees are appreciated from the boardroom to the dining halls. Porter spoke with Global Gaming Business Publisher Roger Gros in his offices in Washington, D.C., in February. To hear a podcast of the interview, during which Porter discusses his efforts to increase tourism in Nevada, the housing crisis and more, go to www.ggbmagazine.com and click on the GGB Podcast button.

GGB: There used to be a gaming caucus that Senator John Ensign started when he was in the House of Representatives. Is that still active?

Porter: Yes, there still is a caucus. Congresswoman Shelley Berkley and (New Jersey Congressman) Frank LoBiondo and, of course, a few others are involved. Where we really get engaged is when there are key issues before Congress. We’ve faced serious setbacks with Katrina and what happened to the industry with some of the tax proposals. So we geared up.

We see each other most every day, but when there’s a crisis, we get together even more. And gaming now is in most every state in some shape or form, so it’s very important to many members of Congress.

Indian gaming is an issue that’s active on the federal level right now. There are a lot of discussions about revisiting this year the IGRA bill that passed 20 years ago. Are you in favor of revisiting that act?

Yes, and today is a good example. A hearing is under way about some possible Indian gaming properties in Michigan.

I think we should always be reviewing, looking at what is happening with this particular hearing that may well take away the state’s ability to make a decision. We have a few members of Congress that, in spite of the fact that Michigan voters were opposed, decided to bring it to Congress to make a decision which would change the whole process. I think it should be state-regulated and I think states should make the decision.

I am personally not very supportive of the reservation shopping. But I understand that most tribes are doing a tremendous job running their casinos. They treat their customers well, they’re professional, and I’m pleased that it has been successful. But I’m very concerned about the shopping. I don’t think that necessarily is a good thing.

A few years ago when the Democrats were in control of Congress there was a consideration of a federal excise tax on gaming, and now that the Democrats are back in control, have you heard any discussion of that at any point?

I think our industry is supported in a pretty bi-partisan manner these days. But this Congress is looking to raise, I think, the largest tax increase in the history of the country, a $200 billion to $300 billion increase. So I think that all businesses should be worried and be very cautious. I think that we have proven in the state of Nevada the success at regulating gaming and taxing it by the state, that it’s successful. It’s not a role for the federal government and we’re going to do everything we can to prevent that from happening.

Another federal issue that the industry is concerned about is online gaming. You have co-sponsored a bill to create a federal panel to study that. How would that work?

We know it’s a rough estimate, but experts say online gaming is a $12 billion to $15 billion-a-year industry and we want to make sure that it’s done properly and that there’s proper oversight. I’ve supported, sponsored and co-sponsored legislation with Congresswoman Shelley Berkley to provide a study so that we can find out the facts. It’s happening and we want to make sure there’s not an abuse happening. I think that this is a good way to do it.

Is your approach that “it’s happening and there’s not a whole lot we can do to keep it from happening, so we might as well control it and regulate it?”

I wouldn’t say that we can’t do anything but I know that, as a representative for Nevada, we’re proud of our industry and of our employees that make it what it is. I just want to make sure that there are not abuses happening. It’s very easy to take advantage of people when there’s no oversight and no regulation.

Your district in Southern Nevada has been growing so fast that it’s become something of a problem. Do you believe that there should be some sort of control over where, when and how the growth is contained here?

I think the way you properly plan growth is through planning and zoning through your local government. I think Nevada’s done a tremendous job with infrastructure.

We have something unique to the world and that’s part of what has helped develop our quality of life. People want to enjoy our community, and I don’t think it should be done from political measures, other than planning and zoning. As long as we have the proper amount of water, streets and highways, and schools… I think that’s how you handle it.