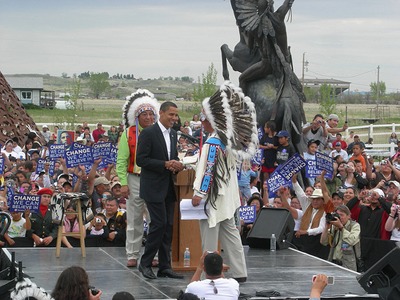 “Someone had to make the state own up to the fact its negotiations with tribes were illegal,” Mazzetti said in a February press release when Department of Interior Assistant Secretary of Indian Affairs Kevin Washburn signed a tribal-state compact for the San Diego-area tribe.

But Mashpee Wampanoag Chairman Cedric Cromwell was a bit frustrated last October when Washburn rejected a proposed compact between the tribe and Massachusetts officials, in large part because the agreement carved out a 21.5 percent revenue share for the state.

The cases may seem unrelated. But they illustrate how the federal court and American Indian policy under the Obama administration is forcing state officials to abandon notions they can balance state budgets on the backs of tribes operating casinos.

“The world has changed between Rincon and denial of the Mashpee compact,” Barry Brandon, executive director of the American Financial Services Association and a citizen of the Muscogee Creek Tribe, told GamblingCompliance.com. “It’s a different day.”

Unfortunately for Indian governments, the crackdown on revenue sharing and the lengthy and complicated federal process involved in placing land in trust for gambling is prompting some states to pursue commercial casinos, creating competition for tribal operations.

And it doesn’t help that the success of some 460 tribal casinos in 28 states has greatly eliminated fears casinos generate crime and social problems.

“I don’t think from a tribal standpoint that anyone would have predicted a proliferation of Indian gaming would ultimately lead to all the states doing it on their own,” Brandon says.

But Indian casinos have brought gambling into the mainstream of society.

The Seminole Tribe of Florida pays the state $300 million annually for the exclusive right to operate table games under a compact that expires in 2015. But some legislators believe expanded commercial casinos would be even more profitable.

Florida lawmakers are reviewing state gambling policy, including the potential for Miami-area casino resorts and, perhaps, levying a tax on internet, or sweepstakes, cafés.

With rejection of the Mashpee compact and potential delays in placing land in trust for the tribe, Massachusetts officials are considering allowing commercial companies to bid for a gambling license in the state’s southwest region, initially designated for a tribal casino.

Mashpee and a dozen private companies are competing for three casino resort licenses in various regions of the state.

Washburn has pledged to work closely with the Mashpees in redrafting the tribal-state compact to meet IGRA and Interior regulations. But the land/trust application is another matter.

Mashpee seeks to have 170 acres in Mashpee and 146 acres in Taunton taken into federal trust. The property in Taunton, located within the town’s Liberty and Union Industrial Park, is the site of the tribe’s proposed $500 million casino.

While the Mashpee application is not expected to generate controversy, most tribal attorneys and consultants believe it will take at last two years to process the trust application for the Taunton site.

The Mashpee land/trust process is further complicated by the 2009 U.S. Supreme Court ruling in Carcieri v. Salazar, which states Interior cannot place land in trust for tribes not “under federal jurisdiction” with enactment in 1934 of the Indian Reorganization Act. Mashpee received its federal recognition in 2007.

A significant delay in the Mashpee land/trust application, following at least a temporary rejection of the tribal-state compact, will likely generate “an enormous outcry” from legislators, says Clyde Barrow, director of the Center for Policy Analysis at the University of Massachusetts.

“People are going to say, ‘You know what? Let’s do commercial gambling instead.’”

Cuomo’s plan threatens to bust a statewide monopoly on casino gambling by the St. Regis, Oneida and Seneca tribes.

Oneida operates Turning Stone Casino Resort in Verona, near Syracuse, under a tribal-state compact that calls for no sharing of gambling revenue with the state.

St. Regis Mohawk in upstate Akwesasne and Seneca, with casinos in Buffalo and Niagara Falls in western New York, have compacts that call for sharing roughly 25 percent of their gambling revenue in exchange for casino exclusivity in regions comprised of seven to eight counties.

But both tribes are withholding more than $500 million in combined revenue sharing payments, claiming New York officials violated their exclusivity by allowing lottery terminals at nearby racetracks. The cases are in arbitration.

Meanwhile, the Cayuga Nation of New York, Seneca-Cayuga Tribe of Oklahoma and Stockbridge-Munsee Band of Mohican Indians of Wisconsin all have applications pending with the Department of Interior to place New York land in trust for casinos.

Stockbridge-Munsee recently acquired 333 acres in Sullivan County, in the Catskills, as part of a federal lands claim. The tribe is seeking to have acreage near the community of Thompson placed in trust for a casino.

St. Regis, Stockbridge-Munsee and Seneca-Cayuga have all been trying without success to get the necessary land placed in federal trust to operate casinos in the Catskills and upstate New York.

“They’ve been trying to get something going for maybe 15 years,” Brandon says. “They’ve come close. But now the writing is on the wall.”

“Andrew Cuomo is a very, very impatient guy,” says Kent Gardner, chief economist with the Center for Governmental Research in Rochester, New  York. “This is a guy who, when you tell him something is going to take 10 years, he looks at you cross-eyed and says, ‘Well, you find someone else to work for.’

“He has, over the years, seen rivers of money flowing out of the state, into New Jersey and Connecticut. One way to deal with that is do a deal with the Indian nations.

The Indian Gaming Regulatory Act requires that tribes seeking to operate Class III Las Vegas-style casinos enter into regulatory agreements, or compacts, with the state in which their reservations are located. But federal courts have blocked tribes from filing suit against those states refusing to enter into compact negotiations.

Since IGRA was enacted in 1988, tribes have accused state officials of engaging in political extortion, demanding shares of gambling revenue in exchange for entering into compacts.

Despite IGRA’s anti-tax prohibitions, 10 of 28 states where tribes operate casinos require shares of casino revenues, ostensibly in exchange for statewide or regional exclusivity.

The 9th Circuit Court ruling in the Rincon case and Obama Indian policy uphold basic principles of IGRA that taxation of tribal revenues is illegal and that gambling is essentially intended to strengthen tribal governments and build strong, diversified Indian economies.

“The current policy is to be much more vigilant of what’s acceptable in a compact in terms of revenue sharing,” Skibine told GamblingCompliance.

“That’s why the Mashpee compact was disapproved,” Skibine says. “It was to send a signal that ‘we’re going to be monitoring those things more closely.’”

While tribes generally applaud the concept that courts and Interior are upholding the pro-sovereignty provisions of federal law, it has created difficulties with Mashpee and other tribes anxious to get into the gaming business.

With the trend to commercial gambling, attorney Brian Newland, a citizen of Michigan’s Bay Mills Indian Community, is warning tribes to guard against any erosion of their statewide or regional exclusivity.

This is particularly true for states such as Michigan, California, New York, New Mexico and Florida, with both tribal and commercial gaming.

“Tribes need to be really aggressive on the legal front in protecting the exclusivity they have in their compacts,” Newland says.

“And they also have to be aggressive in the state political arena.”