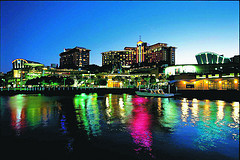 Australian gaming operator Tabcorp has published a detailed booklet that sets out its plan to demerge its casino business from its sports betting, racing and non-casino gaming activities.

Tabcorp shareholders will vote on the demerger on Monday, May 30. If approved, Echo Entertainment Group shares will begin trading on the ASX Monday, June 6.

All eligible Tabcorp shareholders will receive one share of Echo for each share of Tabcorp they own, at no cost, in addition to retaining their original Tabcorp shares.

Tabcorp directors are expecting “significant growth in operations” from new investments and expansion programs, including the A$960 million investment under way at Star City and the proposed A$625 million expansion of the Queensland casinos.