Online gaming and bricks-and-mortar casinos are slowly merging. Here's what could happen. 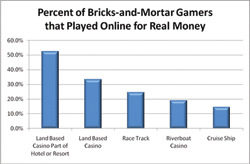 Speculation as to the future of i-gaming in the U.S. increased throughout 2010 and has continued unabated into 2011. Many industry-watchers—including those attending the recent ICE conference in London—are looking anxiously toward the United States in 2011.

Land-based operators look at i-gaming with some trepidation, while European i-gaming operators see the U.S. as a major opportunity for expansion. All seem to be unsure how the market will develop and what role they will play in it.

Behind this uncertainty is a feeling that an internet gaming revolution lurks just around the corner. However, i-gaming in the U.S. is turning out to be more of a slow evolution, with budget-strapped states stepping cautiously into the void created by the federal Unlawful Internet Gaming Enforcement Act (UIGEA) of 2006.

A bill to make New Jersey the first state with legalized intrastate gaming awaits Governor Chris Christie’s signature. California has an intrastate gaming bill ready for a new legislative session, and talk in capitals from Tallahassee to Des Moines expands the geographic scope of states where i-gaming might get a green light in the near future.

Although a state-by-state approach makes it difficult to predict how legislation will be structured, gaming states would be financially motivated to protect their existing gaming-tax revenues. New Jersey’s pending legislation gives land-based operators exclusive access to i-gaming licenses, which could set a precedent for other states to follow.

With only a couple of exceptions, U.S. land-based operators have stood on the sidelines, uncertain about what i-gaming might do to the industry. After all, they have seen some industries torn apart by the internet (think music stores or movie rentals). However, many brands have succeeded in blending online and land-based business. Gap Inc., for example, has popular, acclaimed websites for all its brands, and just expanded its once online-only Athleta brand into a bricks-and-mortar store.

Based on observations of how U.S. i-gaming regulation is evolving and a 2010 consumer survey conducted by the Innovation Group, i-gaming is seen as a potentially positive complement to the bricks-and-mortar side of the industry, not a replacement that will cannibalize revenues.

According to the survey, the penetration of online gaming in the United States runs between 5 percent and 7 percent of all adults, though in reality it is probably somewhere at the low end of the range. In comparison, 28 percent of Americans went to a casino in 2009, according to the American Gaming Association. There is every indication that legalization would increase the size of the American i-gaming market substantially.

Those who already gamble online reported that they would increase their level of play 50 percent upon legalization, and even increase their play at bricks-and-mortar casinos by a small amount. Of course, some of these rosy statistics may reflect self-selection bias: those who go to the trouble to gamble online today, in the absence of clear legality, are probably more passionate about online gaming than the general public, and their behavior does not entirely predict how the wider public will act once online gaming is legalized.

Although contrary to what many in the land-based industry feared, this result is reasonable, given that many current customers at bricks-and-mortar casinos in the U.S. are already gambling online for real money, as the chart above shows. It is also interesting to note that those who patronize casinos with hotels and resort amenities play online more than those who play at smaller gaming destinations, such as racetracks or on riverboats.

For existing operators, the internet also offers access to gamblers that the bricks-and-mortar casinos have traditionally had trouble attracting. Take a look at the players sitting at the slot machines on any American casino floor right now. Those logging on to the gaming websites are demonstrably younger.

Bricks-and-mortar penetration is concentrated among adults over the age of 50, while online gaming is a younger person’s pastime. In other words, not only does i-gaming target a somewhat different demographic than bricks-and-mortar casinos (further reducing the possibility that casinos will lose business if i-gaming is legalized), but i-gaming is also a lifeline to younger players that can keep casinos from becoming the next generation’s greyhound and horse tracks.

Finally, i-gaming offers the potential to diversify consumer preferences for casino games. In our survey, those who reported playing online also reported playing a wider variety of table games at bricks-and-mortar casinos. Again, this may be due in part to the self-selection bias of those who gamble online, but it probably also reflects the fact that i-gaming sites can work as “training grounds” for bricks-and-mortar patrons.

Dealers are expected to teach inexperienced players the rules of the game, but no one likes to be the bumbling newbie at a card table, and the speed of in-person play can be stressful when still learning the ropes. The anonymity and privacy of the internet takes the stress away from trying a new game, and majors like Caesars are already using free-play games on their sites to help patrons “brush up their skills.”

Casinos have spent years building gaming floors, hotels and other amenities, as well as the power of their brands. These investments have created rich customer experiences, but they have also created something that will be paramount online: recognition and, thus, trust. Our survey respondents consistently told us that these factors are important when picking an online gaming site, which is no surprise given that gaming online means sharing financial data and running transactions across the internet.

Customers want to know that the keys to their bank accounts are safe from copying and misuse when they send them down the wires. Big commercial brands like Caesars and Hard Rock have the opportunity to leverage their existing relationships and reputations with those who already gamble online and those who do not. The same is true for smaller operators, including Native American-owned properties, especially in states where tribes have exclusive rights to host gaming.

In addition to trustworthiness and name recognition, bricks-and-mortar casinos can use their existing offline facilities to offer a patron experience superior to online-only operators. Clothing retailers have discovered that consumers enjoy having complementary online and land-based outlets that expand the reach of customer services and make shopping more flexible. In a similar way, bricks-and-mortar operators that invest in online gaming will be able to offer incentives and rewards that flow from online to offline and vice-versa.

Our survey found that online players would value the ability to redeem player points and receive discounts, bonuses or promotions at a nearby bricks-and-mortar casino. Incentives will remain important in the i-gaming business model, but pairing them with complimentary meals and hotel rooms at a resort adds more variety and power to an incentive program, as well as the opportunity to sell online gamblers more of the traditional casino experience once they are through the door.

If operators can integrate i-gaming with existing bricks-and-mortar casinos in a seamless fashion that takes full advantage of player databases and loyalty programs, the internet offers the potential to develop a new business channel that speaks in part to a demographic that their existing properties are simply not attracting. In the long run, i-gaming could replenish the bricks-and-mortar customer base and increase gaming revenues.

The industry’s close relationship with state governments will also contribute to online success for bricks-and-mortar operators.

Moreover, states have compelling reasons to protect land-based casino revenues. By virtue of the taxes they collect on gaming revenues, states are key stakeholders in the U.S. gaming industry. State coffers benefit hugely from the gaming taxes levied on land-based gaming operations, and in some cases, gaming tax rates are so high that the state could (should) be viewed as the majority partner.

Given this relationship, states have every reason to craft legalization in such a way that will keep their bricks-and-mortar operators healthy. The revenues and jobs that these operations create are politically and (more-and-more) fiscally important; no lawmaker will want to see shuttered resorts or lost casino jobs. The laws that legalize and regulate online gaming will likely be written in such a way as to protect bricks-and-mortar operations.

Look at the pioneering legislation in New Jersey: Intrastate gaming, if approved, will be operated by Atlantic City casinos, with the IT infrastructure in-state. When it comes to online gaming, America’s states will use their legislative power to keep the fluid, footloose medium of the internet as firmly connected to geography and real-world casinos as possible, and states will be motivated to give those casinos much more security while learning to work with i-gaming than other industries have enjoyed while learning how to operate on the internet. Blockbuster Video may soon be gone, but think what would have happened if each state had given rental shops the exclusive right to stream movies over the internet.

The shared interests of state governments and bricks-and-mortar operators suggest that online gaming in the United States will not be like online gaming in Europe. There, online-only operators dominate the market, and while these firms have years of refining IT and business models under their belts, an intrastate regulatory landscape will, in all probability, keep them from dominating the United States market, at least on their own. Joint ventures and mergers and acquisitions will be the developments to watch for as bricks-and-mortar operators look to quickly build capacity for the new line of business and as foreign firms look to quickly gain access to the huge United States gaming market.

What this Means for Operators

The data provided by the survey is only a starting point for individual operators. There are a plethora of challenges for bricks-and-mortar operators as they look to enter this new sector and become “brick and click” operators: promoting well-structured legislation; developing in-house expertise; choosing software providers and other partners that have proven online expertise; and, perhaps most importantly, developing the details of a business model that will ensure a seamless, unified projection of their brand online to create synergy between land-based and online business.

Land-based operators in the U.S. will face steep learning curves as they try to understand the impact of i-gaming on existing operations and develop the skill and expertise that will be necessary to participate in this sector. The implications for European i-gaming companies, with their existing online business models and operations, are clear. Partnerships, product licensing, and mergers and acquisitions with U.S. land-based operators will likely be common as these companies seek to participate in the U.S. market.

Of course, existing American operators must critically assess the value and acceptability of certain aspects of the internet gaming market in Europe when planning for the U.S. For example, affiliates—websites that drive business to a casino website for a cut—are an important part of the European market, but to what extent will they work in a heavily regulated U.S. intrastate i-gaming market dominated by existing land-based operators? And how can an operator best integrate online and offline player databases and rewards programs?