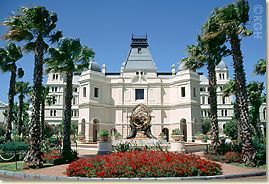 Casino operator Sun International just managed to post an increase in gaming revenue in the three months that ended September 30.

Results for all casinos combined showed growth of just 1 percent over that of the same period in 2007. Properties that made good showings were Carnival City, up by 7 percent; Meropa, 10 percent; and Morula, 11 percent. The Golden Valley Casino showed an increase of 42 percent in revenue due to the opening of the new lodge there.

The groupÆs hotels and resorts generally fared better than the casinos. Room revenues were up 13 percent on the year before. The resort at Table Bay showed a rise of 25 percent. Revenues at the properties in Zambia grew by 23 percent.

The Sun City property saw modest revenue growth of 2 percent. The reason given was the high base in the year earlier due to more group convention bookings. The average room occupancy for the quarter was 76 percent, down 2 percent on the previous year.

The overall EBITDA margin of 33.5 percent was 1.5 percent lower than the same quarter last year. Taking the blame were the lower revenue performances from the major casino properties. But the company considers the result “a satisfactory achievement” given the higher costs caused by an inflationary environment.