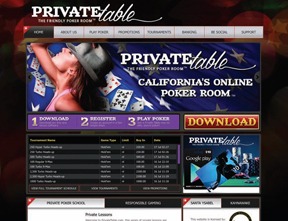 The Ipay Nation of Santa Ysabel in San Diego says its PrivateTable.com website will soon be taking wagers on poker, although the launch had been delayed several times when GGB went to press.

Alturas Rancheria in upstate Modoc County plans to take real-money wagers on bingo, although it, too, has continually delayed its launch of Desert Rose Bingo.

The Internet Tribal Online Gaming Alliance (ITOGA), a coalition of seven tribes in Northern California, Oklahoma and Michigan, also announced plans to launch a real-money bingo website. But the group hasn’t been heard from for several months.

Santa Ysabel, Alturas and the other California tribes believe they can legally offer online poker and bingo as Class II games regardless of what the legislature does, or doesn’t do.

While the tribal operations have not met with much success, the concept of accepting off-reservation wagers on Class II games under the Indian Gaming Regulatory Act (IGRA) without state approval has sparked debate over the potential legality of the operations.

Tribes contend that with internet servers on the reservation, wagers legally take place on Indian lands and are subject to regulation by the National Indian Gaming Commission (NIGC).

And while bingo is clearly a Class II game under IGRA, Santa Ysabel is seeking an NIGC opinion that online poker also constitutes technological enhancement to Class II gaming as permitted under IGRA.

The NIGC has yet to weigh in on the issue.

“We’re definitely moving the needle… forcing their hands to reach some conclusions and provide some direction,” says David Vialpando, chairman of the Santa Ysabel gambling commission.

The NIGC in a 2000 opinion involving a proposed lottery by the Coeur d’Alene Tribe in Idaho turned thumbs down on off-reservation wagers.

The opinion authored by then-counsel Kevin Washburn, now assistant secretary of Indian affairs, said “a tribal gaming operation is not authorized under IGRA if all or part of the gaming occurs at locations that do not fall within the definition of Indian lands.”

Tribes believe the opinion needs to be revisited.

Most Indian law experts believe NIGC will rule off-reservation online operations do not fall under its jurisdiction and pass the legal baton to state courts and the U.S. Department of Justice.

“The NIGC is clearly going to have to face the issue,” says Joe Valandra, CEO of Great Luck LLC, partner with Alturas in the Desert Rose Bingo website.

NIGC opinions could have far-reaching implications on the ability of tribes in California and throughout the country to launch gambling websites without state approval.

But regardless of NIGC views, the issues may eventually be left to state and federal courts.

“If the courts hold the gambling is, indeed, Class II with technological aids, which is permissible under IGRA, that’s the end of the story,” Norman DesRosiers, a consultant and former NIGC commissioner told Gambling Compliance.com. “That will open the floodgates for tribes.”

The NIGC can issue closure orders for any gambling in violation of IGRA, but the agency has historically refrained from taking enforcement action against tribes.

“I’m sure NIGC would just as soon arrive at the conclusion none of the activity we’re involved in falls under IGRA,” Vialpando says.

“If they determine because the activity is generated off the reservation it is not covered by IGRA, we’re prepared to go to court and argue our case that it would be an incorrect conclusion.

“We’ve been working on this enterprise for two years. We’ve done our homework. We have a very solid regulatory framework.”