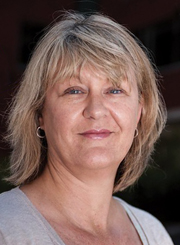 Clarion Gaming has unveiled an “Into the Future” campaign in support of ICE London, to be held February 4-6, 2020, and ICE VOX, February 3-4, also in London.

The campaign was launched as the industry focuses on London and the thousands of product innovations that exhibitors will be presenting on the show floor, alongside the agenda setting content that will be debated at the co-located ICE VOX.

“The majority of the 35,000-plus visitors who attend ICE London, many of them traveling thousands of miles to be with us, aren’t interested in the past—they want an insight to the future,” said Clarion Gaming Managing Director Kate Chambers (l.). “Whether delegates are interested in future technology, future regulation, future trends, future lifestyle changes, opportunities or challenges, ICE London is all about the future. Our passion, and that of our stakeholders, is to embrace what’s next, hence the 2020 campaign.”

The 2020 theme was inspired by a quote from Richard Schuetz, who has held many senior positions in the industry, Chambers said. “At ICE, one sees the latest technologies, which is why I always argue that ICE is like stepping into the future,” Schuetz said. “That is the magic of ICE.”

Chambers also quashed a rumor that ICE was planning to move to Hannover in Germany next year, explaining that ICE has a contract with the ExCeL site until at least 2022.

“ICE London is experiencing the most successful period in its history,” she said in a statement. “Since we moved from Earls Court to our home at ExCeL London, the brand has undergone a phase of exponential growth with attendance increasing from 21,336 in 2012 (the last edition of ICE to be held at the Earls Court Exhibition Centre, London) to 36,093 (2019).

“Over the same period, the number of exhibitors has increased from 430 to 612 and the net floor space has grown from 22,500 to 47,500 square meters. While we are always looking to and planning for the future, it’s important to confirm that there are no plans to relocate. Everything that we do is undertaken in partnership with our ICE London stakeholders based throughout the 155 nations that traveled to ExCeL London in February this year.”