Las Vegas holds its breath as meta-resort is unveiled 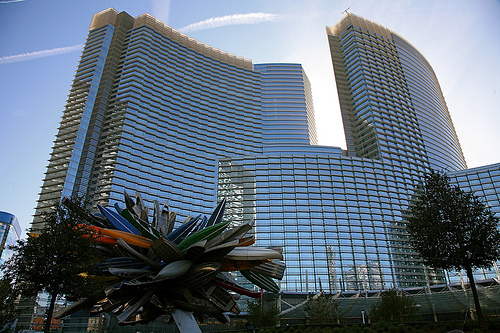 More than five years after holding a press conference to announce the most massive project to ever be built in Las Vegas, MGM Mirage officially kicked off its unveiling of CityCenter with the opening of the Vdara Tower December 1. Later that month, the upscale shopping mall Crystals opened; the Mandarin Oriental luxury hotel debuted, and finally, Aria was christened, the only casino resort that occupies the property.

Like MGM Mirage, the state of Nevada is hanging its hopes on the success of the $8.5 billion CityCenter, which could raise Las Vegas from its recession-induced doldrums. There is palpable excitement in the air as locals and tourists prepare to welcome the meta-resort, a symbol of the boom times that are now long gone.

At Vdara’s opening, one of the great minds behind CityCenter, MGM Mirage CEO Jim Murren, said that the resort is “not a hotel, or any element in and of itself. It is an environment.”

“Some things are so great they need to be experienced, not explained,” Murren said. “CityCenter is that.”

Feeling as though Las Vegas lacked a significant cultural presence, Murren worked with some of the world’s most renowned architects, including Rafael Vinoly, Cesar Pelli, Normon Foster and Daniel Libeskind, to create not just a casino, but an environmentally conscious and artistically innovative world unto itself.

Works of art are central to each of the architecturally stunning buildings within CityCenter, from Vietnam War Memorial designer Maya Lin’s 87-foot interpretation of the Colorado River, made of recycled silver, to sculptures and paintings from Henry Moore, Frank Stella, Claes Oldenburg and several other prominent artists. MGM Mirage also hired WET, the water feature and fountain design firm behind the Bellagio fountains and the Mirage’s volcano, to design water installations at CityCenter.

“We’re at the eve of opening up something that was unimaginable this year, that will have a profoundly positive impact on our cash flows, our cross-marketing opportunities for our other properties, and on visitation and revenue to all of Las Vegas,” Murren said. “I believe that it couldn’t happen at a better time now that we’ve survived the first six rounds of the fight.”