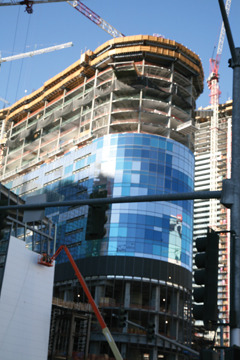 Earlier in 2008, MGM Mirage admitted that construction problems at CityCenter resulted in at least one tower being of questionable structural integrity. But at the time, the “Veer” tower was implicated.

Following an investigation by Clark County, it was revealed that there were problems with the Harmon Hotel. The rebar-metal rods that give strength and flexibility to concrete foundations-was not spaced properly, and a major retrofitting project would be necessary if construction on the tower was going to continue. At the time, MGM Mirage made all indications that it would make the proper changes and build the Harmon as it was designed.

Last month, however, the company announced it will drop the condo component of the project and top the building at its current height. Company officials said it was an economic decision that was reached because a redesign or retrofitting project would be expensive. They did not mention the fact that only 88 of the proposed 200 units are under contract to be sold, or that properties throughout Las Vegas are finding it extremely difficult to close sales on condo units in the current economy.

As it stands, the exterior of the project will be completed by the time the complex opens at the end of the year, but work on the interior will continue and it won’t open until 2010.

The move is expected to save the company as much as $600 million.

At Caesars Palace, a new hotel tower scheduled to open this summer is now on hold. The Octavius Tower, part of a $1 billion expansion project, will not be opened until, according to Harrah’s Entertainment CFO Jonathan Halkyard, “a period of stronger demand.”

While the tower is in mothballs, the rest of the expansion-110,000 additional square feet of meeting and convention space, three 10,000-square-foot villas and an expansion of the Garden of the Gods pool and garden area-will open on schedule.