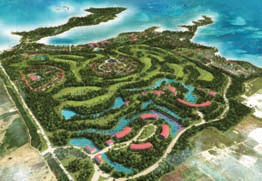 Chinese investors are planning to spend more than billion on the development of the Caribbean’s biggest casino, to be called Singulari. The 1,600-acre property in Antigua and Barbuda would reportedly create 1,000 jobs for people in the economically challenged nation.

Singulari would be 50 percent larger than the Baha Mar resort now under construction in the Bahamas. It would occupy 900 acres in northern Antigua and 700 additional acres in the surrounding islands, and would include several hotels, hundreds of private homes, a school, a hospital, marinas, golf courses, an entertainment district, and a horse track.

“Singulari will provide Antigua and Barbuda with an economic boost and galvanize the destination as a tourism force to be reckoned with,” said Sam Dyson of Luxury Locations, the real estate agency that brought Beijing-based Yida International Investment Group to the island in May 2013 and negotiated the land deal.

“Over the next 10 years, Yida Group and its global partners will create an additional $2 billion of gross domestic product and economic value to Antigua, including sales of real estate, creation of new industries and origination of foreign direct investment,” he added.