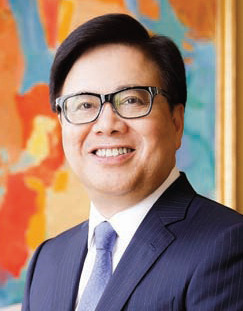 The retirement of the effective Ed Tracy as president of Sands China opened an opportunity for the parent company, Las Vegas Sands. With government rulings and actions increasingly impacting operations at the company’s Macau properties, maybe it was time to appoint someone who understood the inner workings of the Chinese and Macanese governments.

That person was Wilfred Wong, an experienced businessman from Hong Kong. Wong most recently was chairman and chief executive officer of the Hong Kong-listed Hsin Chong Construction Group Ltd. Prior to that, he served in management positions at other public companies in Hong Kong. In addition, Wong served in many positions appointed by the National People’s Government, as well as being a member of the People’s Congress of the People’s Republic of China for 15 years.

In his first media interview since being appointed in September 2015, Wong told GGB that it was the challenges presented by the current situation in Macau that attracted him.

“I like to get involved in a company that has potential, somewhere I can take it to new heights,” he says. “Then when it stabilizes, I get the urge to move up to something more exciting.

“And they caught me at this stage. I had taken my former company to

historical highs in both revenues and profits. And the possibilities at Sands China are endless, so I decided to accept this challenge.”

Wong admits that the challenges are great.

“We all know this is not the easiest of times to be in the gaming industry in Macau,” he says. “But it’s also a time when we need to diversify the business to other tourist attractions and make sure we stay the most competitive among our competitors. We need to deploy the best talent within a large company.”

“I’m a fast learner,” he says. “Just today, I spent two hours in the surveillance room trying to understand the situation and strategies deployed in that part of the business. I love to learn about the industry.

“But Sands China is more than just the gaming industry. It is hotel management, retail, F&B, entertainment and MICE, as well as gaming. So I don’t see it as anything different from my previous jobs. But I have greater confidence in this job because of the talented people we have in this company.”

Wong is convinced that the current campaign to attract more tourists rather than gamblers to Macau will succeed. He points out that business at Sands China properties has not been affected by the recent openings of Phase II of Galaxy Macau and Studio City.

“I have confidence that as more tourist attractions open on the Cotai Strip the pie is going to get bigger,” he says. “That’s exactly what we have seen with the openings of these two projects.

“Our hotel occupancy this year has averaged over 80 percent, with a good ADR (average daily rate).”

One area where Wong has much expertise is construction, and he has immersed himself in the ongoing development of the Parisian Macao.

“We must be assured that the construction remains on track,” he says. “We monitor it very closely. I take a very keen interest in these programs.”

He says the slowdown in Macau has actually benefited this development.

“We’ve allocated some dealers and other personnel from our properties to the Parisian, so we will open seamlessly. We are also filling up our retail spaces, because we’re adding another 200 or so shops to our retail inventory. This is important because we want to be a destination where people can come and enjoy everything we have to offer.”

Wong says the retail experience at the connected Sands China properties on the Cotai Strip will make it the mecca for shoppers in all of Asia.

“With the addition of the Parisian,” he says, “we will have a total of 850 shops in our properties, and they will be all linked up via foot bridges that have been approved by the government from one building to the others. This will be a shopper’s paradise.”

While all other Cotai properties are including some MICE space, that space is still dwarfed by the square footage offered at Sands China properties, principally the Venetian Macao. Wong says that gives his company a great advantage.

“This is a tribute to the foresight of our chairman (Sheldon Adelson),” he says. “He saw in the beginning that this great convention and MICE facility would be an important business. We’re now seeing this advantage.”

“The opening of the Macau-Hong Kong-Zhuhai bridge is going to be a significant enhancement to our capability to house and host international conventions,” he says.

Also, the actual reasons for the Macau slump are misinterpreted, says Wong.

“The slowdown in Macau is more a result of a slowdown in the global and Chinese economy than anything else,” he points out. “When people are in this situation, they don’t spend so much money on gaming. Anecdotally, we see people who used to come to Macau once a month who now only come once every four or five months. They tell us business is not good, and that they have to attend to their own business first before they can relax. This is the main factor in the slowdown.

“But now that China is linked by super highways and high-speed rail, we can reach a much bigger area than we could in the past.”