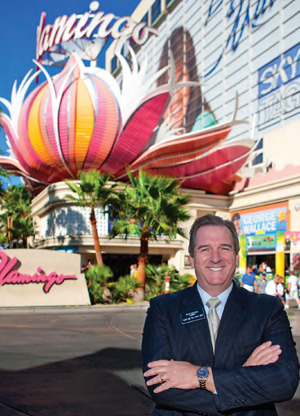 It’s a bit ironic, but people who start working in the casino rarely get to run the casino. Rick Mazer is the exception. After breaking in as an original craps dealer at Caesars Atlantic City, Mazer began a slow and steady climb in a career that has mainly been focused in the Midwest.

For 15 years, he worked his way up through several organizations until he was running the Horseshoe in Hammond, Indiana, the most successful Chicagoland casino, and Horseshoe in southern Indiana. His expertise at operations and his regard with members of upper management increased during that time.

In 2009, an important position opened on the Las Vegas Strip, and Mazer was appointed to lead not one, but five properties in the center of the world’s most famous casino street. Harrah’s Las Vegas, Imperial Palace, O’Sheas, Flamingo and Bill’s Gambling Hall all fall under Mazer’s operations. It’s like operating one of the largest hotels in the world, with 10,000 hotel rooms.

But if that wasn’t enough, soon after he took over, Caesars Entertainment announced an aggressive plan to transform that side of the Strip (opposite its flagship, Caesars Palace) into yet another Las Vegas must-see attraction. The Linq project will “link” Bill’s and the Flamingo with the other three properties via a very unique mall that will include innovative retail, restaurants, bars and other entertainment attractions. At the very end of the Linq will be one of the world’s largest observation wheels, giving Las Vegas visitors a breathtaking view of not only the pulsating lights of the Strip but also the majestic mountains that ring the valley.

Also included in the project is a complete redesign and re-theming of the Imperial Palace and room upgrades in the IP and the Flamingo.

Mazer says the Flamingo will once again become one of the top casinos in Las Vegas.

“It has a very dynamic history, notorious in its own right,” he says. “It’s a great casino environment that just needs a little tender loving care, which we are addressing at a very measured pace.”

With the Linq project, however, all bets are off.

“This is going to create a corridor of highly engaging food and beverage product with some retail outlets, along with the world’s largest observation wheel,” Mazer says. “Just by virtue of its location, it is going to be very well received by visitors to Las Vegas and be yet another reason to stay on the Strip.”

The wheel, says Mazer, will be a truly unique experience.

“It has pods that can hold up to 40 people,” he says. “In addition to just doing a ride, we have had numerous requests from people who want to be married in the wheel. You can rent out one pod or the entire wheel. We can offer conventions and meetings a truly unique experience complete with food and beverage.”

Another new element, the Margaritaville casino inside the Flamingo, opened in October in what was once a dark hallway.

“Margaritaville is a very strong brand that is more than just a place; it’s a state of mind,” Mazer explains. “To re-create that in a themed gaming environment was the trick. We used the Margaritaville designers and customers have been very receptive to it.”

The wheel and Linq project is expected to be completed late next year.