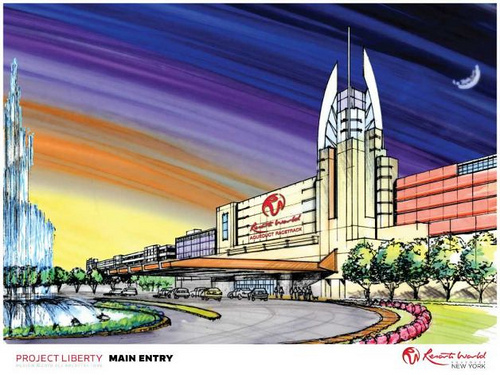 New York Governor David Paterson, whose term in office ends in January, is going out in a firestorm of controversy.

Paterson’s support of a $700 million Indian casino in the Catskill Mountains, which would be developed by the Oneida tribe based in Wisconsin, has earned the governor some of the worst reviews of his career.

The New York Daily News called it a “harebrained” idea that has thrown the state’s “confused and jerry-rigged gambling policy into further chaos.” The Daily News also castigated Paterson for negotiating his pact with the Stockbridge-Munsee band of Mohicans “in complete secrecy with less than two months left in his lame-duck term.”

The Saratogian was similarly unimpressed. In its editorial, the daily newspaper carped that the government “should not allow Indians to run billion-dollar gambling operations far from their native property, exempt from the taxes everyone else has to pay.”

The paper also decried the timing of the announcement, made weeks after Genting NY LLC paid $380 million to begin development of a racino at Aqueduct.

The Wall Street Journal reported that Paterson, who’s kept details of the casino deal under wraps, may be in breach of New York’s public-disclosure laws. His secrecy, the Journal reported, “has deepened suspicions about the gaming plan among lawmakers, state tribal leaders and government watchdogs.”

Ray Halbritter, head of New York’s Oneida Indian Nation, told the Journal, “I don’t think you keep things secret unless you have something to hide.”

Most published accounts say the proposed deal will face significant hurdles, particularly at the federal level, because the prohibition of off-reservation casinos has never been fully eliminated. But New York Senator Charles Schumer is a fan of the Paterson plan, and promised “to push it as hard as I can” before the Department of Interior.

When he visited Monticello to sign the compact, Paterson said the casino would create thousands of jobs, inject $900 million into the state economy, and deliver $15 million a year to Sullivan County.