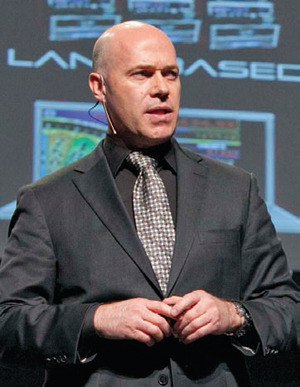 The recession of the past few years has slowed a lot of functions of the industry, but one thing it hasn’t slowed is the march of technology. As gaming revenues for casinos went down, a new gaming world began to emerge.

Technology in slot machines has advanced; technology in systems has advanced. At the same time, gaming has branched out to new media. The U.S. is preparing for what could be a new online gaming industry to match the one already in place in Europe, as casinos begin to look at extending the property experience to the internet, to mobile devices and even onto the ubiquitous social media that dominate today’s communications.

It’s what slot and system manufacturer Bally Technologies calls “completing the circle” of the delivery of the casino environment—not only the games themselves, but service requests, room reservations, restaurant reservations, information on casino events and loyalty club services and other functions directly to casino customers. For casinos, business intelligence tools and mobile technology now available to casino employees is enabling more efficient casino operations and effective marketing.

It was all on display at the ninth annual Bally Systems User Conference, held in early March at the Pechanga Resort Casino in Temecula, California. Executives from hundreds of casinos across the industry converged on Pechanga, where Bally executives painted a picture of the future of casino and slot operations.

“We’ve made a lot of significant progress in the past few years, and we’ve delivered on our promises,” said Ramesh Srinivasan, president and COO of Bally Technologies, in a speech opening the conference. “But I assure you, this is just the beginning; we have only launched the prologue. You ain’t seen nothing yet.”

The ninth edition of the Systems User Conference set records for overall attendance, and for the number of marketing and operational executives attending. According to Srinivasan, the 180-plus casinos represented at the two-day event was a 50 percent increase over last year’s conference (also held at Pechanga). “Every department within the casino is represented at record levels (at the conference),” he said.

All those executives came to see much more than just the inspirational keynote speech by NBA legend Earvin “Magic” Johnson, which wrapped up the conference. What they saw was Bally’s plan for the complete connection of casinos to their customers, and vice versa.

That connection is the culmination of what Bally started five years ago, when casinos were given a roadmap for what the manufacturer called the “Networked Floor of the Future.” However, what started out as a demonstration of the unique capabilities of a server-based slot floor has evolved into a plan to use new technologies to engage the player at every level, and, as Bally CEO Richard Haddrill said during a Q&A session, “help analyze how operations, marketing and IT can come together to give you the biggest bang for your buck.”

In presentations and break-out sessions, Bally executives covered all the technology tying this plan together, beginning at the physical machine level, as Derik Mooberry, senior vice president of products and operations, presented the latest Bally game introductions, including the “Michael Jackson: King of Pop” video slot, featuring Bally’s new immersive sound chair; and “Grease,” the new interactive bonus video slot based on the blockbuster 1978 musical film of the same name.

Mooberry’s session presented the particulars of all of the five newest Bally cabinets, and demonstrated the latest applications of one of the Bally milestones that came out of the company’s “Innovation Lab,” the unit headed by Bryan Kelly, senior vice president of technology and the man in charge of sending Bally troops out to high-tech trade shows across the country every year in search of larger-market technologies that can be applied to casinos.

Some of the games Mooberry showed represent the newest uses of the iDeck, the groundbreaking touch-pad that came out of the Innovation Lab as a virtual button panel but now serves as a substitute for joysticks, track-balls and other arcade-style game drivers in upcoming slots such as “Skee Ball,” which replicates the famous arcade game by having the player touch the iDeck to “roll” a ball for an award; and “All That Jazz,” in which the iDeck changes into a piano keyboard, allowing the player to win money by matching a tune much like in the “Guitar Hero” and “Rock Band” home video games.

“Player Interactivity is an area in which we’ve done a huge amount of work,” Kelly told GGB after his conference presentation. “We’re focusing a lot of work on how we take that iDeck to the next level, because it is the ultimate input device. I came from 20 years in the arcade business, with track-balls, joysticks, all these button controls—now we can virtualize them all.”

He added that the iDeck gives players a kind of “tease” that a normal touch-screen pick-a-game cannot. “In an arcade or home console game, kids have a controller,” he said. “Adults in bars use the track-balls. If you look at almost all (slot) bonus games, you touch and interact right on the screen. There’s no tease. If you bring the controls down to the where the player’s hands are, first and foremost, it’s more ergonomically comfortable. But when you shoot or launch something, there’s a tease, because there’s a chance you could miss it. The controls are just like all arcade and home console games— virtualized away from the game experience.

“From all the years I’ve done in the coin-op arcade and online business, it’s a key game mechanic that makes it fun, that player tease.”

Kelly said the next new application of the iDeck will come on the game “Total Blast,” due out in the summer with a “Space Invaders” type of shooting bonus (called “U-Shoot”).

“We believe that this input device called iDeck is going to be one of the most important game experience improvements ever in our industry,” Kelly said.

Kelly added that the game applications are only the beginning. “We’re bringing this convergence together of mobile, social, internet and land-based gaming,” he said. “The casinos need to prepare themselves to start giving these game experiences to people out on mobile devices,” he explained. “They should experiment with social-type applications to drive people back down to the property. That is the next wave of CRM. You’re not going to be just sending mail out or emails. Electronic marketing through these different distribution channels is going to be the next wave.

“That’s one of the biggest things we think the customers could do to increase traffic, and player acquisition and retention. We’re augmenting our interactive team, so we’re doing these types of applications that will incubate the interactive team and the mobile team.”

Bally Interactive, a division formed just after Bally acquired its own mobile platform with the purchase of MacroView Labs last year, has concentrated on what the company calls “gamification” of the marketing function: where direct mail was once the main reward function of a players club, rewards now can be given directly to the player through bonus games and tournaments available immediately, while the player is still in the casino.

Kelly said one way this is being done is through enterprise-wide events and instant tournaments enabled by the Bally iVIEW Display Manger and Elite Bonusing Suite. Virtual Racing and the “World’s Largest Slot Tournament,” held at Pechanga on February 11 on 1,141 machines, are only the beginning of what can be a link from the casino to the player through the internet and social media, with the goal of bringing those players back to the casino.

According to Kelly, the next step is to make the tournament experience a tool for the casino. He demonstrated how tournament scores on the floor can post not only to an in-casino display, but to a leader board online. “If you get on the leader board, you enter your initials or your name,” he said. “It’s bragging rights, just as has been proven out in arcades. But the casino posts the leader board on its Facebook site. Now, you can go home and play at the Facebook site or the casino’s website.”

Kelly and other Bally executives emphasized at the conference that the company is “B to B, not B to C.” “We’re trying to equip our customers with tools to take advantage of these new paradigms—the social paradigm, the mobile paradigm and the internet,” Kelly says, adding that while the internet will eventually be the site of legal online gambling in the U.S., it can be used now as a driver of players back to the casino. “This is all about free play, to make their (casino) brand sticky,” he says. “We’re trying to create eligibility on the web and social spaces to qualify for an event back on the floor.”

Bruce Rowe, senior vice president of strategy and customer consulting, said in one of his several presentations that “gamification” is an effective way of reaching customers because humans like to learn by playing games. “Not through gambling, through games,” he said, “through content portability and gamification, from RNG-based games all the way through mobile.”

Rowe also gave a demonstration of many of the advances Bally is offering customers in the way of business intelligence systems, and the use of new media to improve the bottom line. He demonstrated improvements in the SDS and ACSC casino management systems aimed at using non-gaming spend across the resort to find potential new customers in the casino.

“Our systems are being built for this,” he said, noting that in Las Vegas, spend on non-gaming amenities can “telegraph” how that customer may be turned into a valuable player. “A person who buys four tickets for Celine Dion at $250 apiece, goes to a steakhouse with an average cover of $100—and goes to the hotel and pays, in cash, $400 on a Saturday night—is likely capable of being a very good gambler,” he said. “Whether they are is a different question, but the system can help us understand the joint value of that customer.”

Rowe also presented the use of mobile technology as a means of capturing customer loyalty, through what he called “persistent customer contact.” “It means being able to talk to your customer wherever they are, and being able to talk to them with a sense of immediacy, so if they’re not having a good trip, or they’re having a great trip, you know what message to send them and at what time and how to do it.”

One demonstration of this concept is what Rowe called “investment at the point of dissatisfaction.” If a restaurant customer doesn’t like how a meal is prepared, he noted, the manager resolves the problem on the spot. “They don’t send you a coupon 15 or 30 days later in the mail and try to re-engage you and get you committed to them,” he said. “Yet, today, that’s still the way we do many of our reinvestment programs in gaming. We analyze, then we mail, and we do things that take the point of satisfaction away from the event.”

Rowe suggested programs like “Flex Reward” cards, where casinos can set parameters to reward players if they have lost a certain amount of money on one or two machines in the casino—credits can automatically go to the meter when the card is inserted next. “It’s the same, exact money we would have sent them in the mail, but it’s being given on the spot. We’re reinvesting in the player at the point of dissatisfaction.

“Systems have migrated from being a requirement to do the accounting and run the casino to a tool that’s used by marketing and casino operations in a very different way,” Rowe said. “We spent a lot of time rebuilding our core products in 2005 and 2006, and now we’re in position to accelerate the kind of innovation we’ve been working on for a lot of years.”