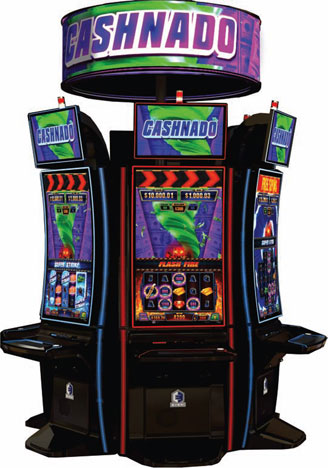 Cashnado base games Flash Fire and Super Strike are both 243-ways-to-win video slots. During the primary game, landing “Key Pays” symbols on reels one or five awards the player the value of all Key Pays scatter symbols on the screen, which can include 1,000 credits times the bet multiplier, bonus credits and any of five jackpots, which include three static prizes and two progressives, resetting at $1,000 and $10,000.

There also are two separate free-spin features, Flash Fire and Super Strike. Both award six free games, with Super Strike expanding the reels to a 3-5-5-5-3 array for 1,125 ways to win on each spin.

But what makes the game special is a mystery bonus that occurs across the entire bank. The system will flash a “Cashnado Alert” across all machines to heighten anticipation for the coming bonus, called “Cash Grab.” A timer appears counting down the seconds to the community bonus.

The bonus is just what the name says. A tornado of swirling cash flies across the monitors of all machines in the bank, and players touch bills for a credit award or a progressive symbol, which reveals one of the five jackpots.