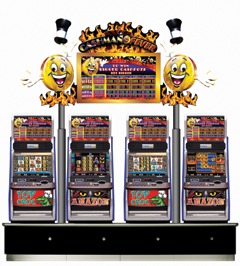 Cashman Fever is a follow-up to Aristocrat’s popular “Mr. Cashman” series. The main event in the new version, as was the case with the original, is a four-level progressive jackpot won through a bonus event.

What’s different about the progressive in Cashman Fever, though, is that the player’s bet determines how high the progressives are. There are actually 20 progressive jackpot pools—each bet on every linked game increments 20 different jackpots. It is a 50-line game. A minimum bet to qualify for the progressive round is 50 credits, to cover all the paylines. At that minimum bet, the jackpots reset at $5 (“Mighty”), $15 (“Mega”), $50 (“Jumbo”) and $1,000 (“Super”).

One other version available to casinos offers jackpot levels at half those levels, with a top prize of $2,500.

The game itself contains compelling stacked wild-symbol and jackpot multipliers, all tied to the game’s main “Cashman” character. The “Cashman Added Wild Feature” randomly replaces symbols on any primary game spin with stacked Cashman symbols to fill all spaces on one or more reels.

The “Cashman Multiplier Feature” randomly appears at the start of any spin to multiply any wins for that spin from 2X to 10X.

The main “Cashman Fever Cashpot Feature” leads to one of the four progressives using a game screen that displays a grid of squares. The player picks one corner as a starting point, and the squares spin like reels to reveal credit awards or “Cashpot” symbols. The number of Cashpot symbols equals the progressive level. Linking 12 triggers the “Super” prize.