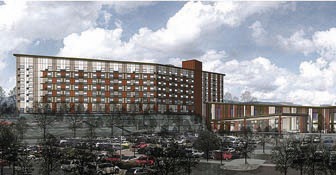 The Eastern Band of Cherokee Indians’ 0 million Cherokee Valley River Casino near Murphy, North Carolina is on track to open in August or September, said Tribal Casino Gaming Enterprise Chairman Ray Rose. “Hotel and casino structures are up. Framing is done, but now we’re at the point of interior heating, air, sprinklers, all that stuff. It won’t be long until everything is in the walls and inspected and wall finishing is going on.”

Road and infrastructure development surrounding the casino and hotel also are moving forward. Brian Burch, Department of Transportation construction engineer, said, “We’ve had monthly meetings since these projects were started where we meet and discuss the coordination effort, whatever’s coming on each of the projects, scheduling times to work, when deliveries are going to be made.”

Rose said recruiting and hiring the 900 employees needed for the operation will begin in April. “We know that Cherokee County has one of the highest unemployment rates in the state, so we’re hoping we can draw on that, including some tribal membership down there,” he said.

The Cherokee Valley River Casino, the second partnership between the Eastern Band and Caesars Entertainment, will feature 108,000 square feet of gaming with 1,200 slots and 75 table games, plus a 300-room hotel. The tribe owns Harrah’s Cherokee Casino in Cherokee at the edge of the Great Smoky Mountains National Park.