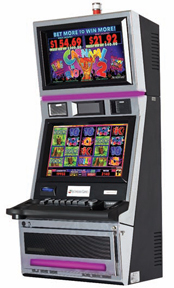 This is Multimedia’s long-awaited sequel to what has been one of the slot-maker’s biggest hits, Carnival in Rio. Carnival in Rio 2 is a 100-line game on a four-by-five screen. As with the original, models were used to create the realistic dancing animation that forms wild reels. In this case, they’re called “Samba Wilds.”

Carnival in Rio 2 also introduces “Must-Hit Jackpots” to the theme. Two progressive meters are at the top of the top-box monitor. On the penny version of the game, the progressives reset at $154.50 for the top prize and $21.75 on the secondary progressive. The jackpots on this version must hit by $300 and $40, respectively.

The game is available in denominations through dollars, so multiples of those jackpot amounts apply depending on the denomination chosen. In any case, the “Must Hit By” amounts are on the front of the display, which is designed to cause “jackpot fever”-type coin-in as the must-hit level of the jackpot approaches.