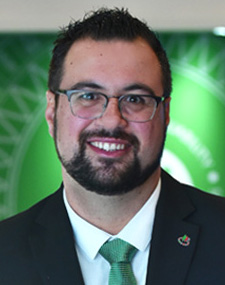 Think of a croupier as the CFO of the table game crew, handling the money in and the money out. And in that world, Steph Nel began his journey in the casino industry in 2000 with the Southern Sun Montecasino in suburban Johannesburg. The South African native excelled and in 2003 he ascended to table games supervisor at Gold Reef City Casino.

Being a croupier “helped in all aspects of my life,” Nel says. “It taught me many life lessons as all dealers are customer-facing, so conflict resolution, empathy, dedication with shift work and most people skills. It also gave me insight into my current role to better understand our customers as I have worked in operations.”

More than 20 years later, Nel is still at it. Since 2007, he’s spent much of his career with TCSJohnHuxley, a leading manufacturer of table games equipment.

“We supply and manufacturer anything from wheels to chippers, display boards for all table games, accessories, gaming layouts and now dice. Basically, anything that goes with table games, we can help out,” he says.

After almost six years with TCSJohnHuxley in South Africa, Nel hooked up with Axes Network. Axes is a cloud-based casino enterprise management solution company that creates tools and applications to manage cashless transactions, loyalty and rewards programs and similar operational functions for casinos. He was vice president of sales in South Africa and then chief commercial officer.

But TCSJohnHuxley came calling again. The opportunity included a move to the U.K.

“As much as I loved living in South Africa, it was an opportunity to move to a world-class city as I was based out of London,” Nel says.

He returned in early 2015 as senior business development manager. In 2017, he became general manager for the Americas, and transferred to Las Vegas. In 2020, he was elevated to managing director for the Americas, his position today.

“Las Vegas is such a beautiful city with magnificent contrasts,” Nel says. “I enjoy going out to the hustle and bustle of the Strip but adore being out in nature. The desert holds a special time. Every time I go out I tend to find something else to fall in love with.”

When Nel worked for TCSJohnHuxley in South Africa, his boss and mentor, John Whiskin, helped guide his career.

“Through his tutelage I grew as an individual with some of his pearls of wisdom I still use today,” he says. “Sadly, he passed away in 2017 and I miss him every day.”

Covid-19 is something now in the rearview mirror, but it changed the landscape forever, he says. Nel and his team managed to adapt to it.

“We used the time to reshape how we approach business, and I feel we are sharper and more focused than before,” he says. “I think everyone changed. Who would have ever thought the world would be at a standstill? I feel it showed us that we need to sometimes think that the unthinkable can happen. Life can change in a heartbeat, and not to sound too cliché, but don’t sweat the small stuff and be in the moment. It can be at work or in your personal life. It can all change tomorrow.”